We are looking for an organisation that is into protecting, keeping and releasing clouded leopards? Please contact us (Wild Cats World) on info@wildcatsmagazine.nl. There’s a young clouded leopard waiting for a speedy release. At this moment he is cared for at the Cikananga wildlife Rescue center, Java/Indonesia. Anyone who can help out, the sooner the better, please get in touch!!!
Thanks a lot!! 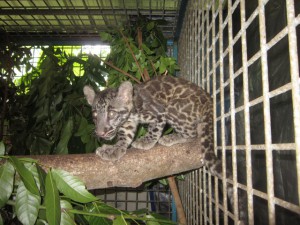 A closer look at the African wild cat

The diminutive African wild cat is often overlooked in favour of its more impressive feline cousins. However, what it lacks in size and strength, it more than makes up for in stealth and success. This small, but perfectly adapted predator, is prevalent in much of sub-Saharan Africa, but is seldom seen. Just like its more famous relative, the leopard, it prefers to remain elusive. And its preference for a clandestine existence makes studying it somewhat difficult, which means that population estimates are scarce and unreliable. But just because you can’t see it, doesn’t mean that there isn’t one there! 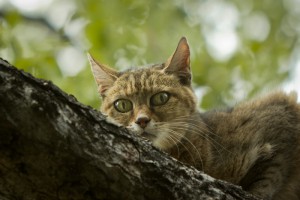 With mankind’s relentless spread across this once pristine Earth, the future of the African wild cat is in jeopardy for two main reasons. Firstly, as a free roaming animal, it struggles with habit loss due to farming or urbanisation. This then inevitably leads to conflict with livestock and humans. 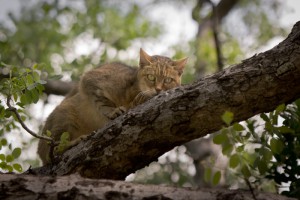 The wild cat is directly related to the domestic cat, sharing not only the same genus, but also species. The taxonomic separation comes only at a sub-species level. The domestic cat, however, is very adaptable and is the most widely distributed feline in the world. This leads to the second and main issue – genetic reduction. The common house cat and the wild cat will actively hybridise. Being a sub-species, the genetic coding is so similar that dangers of rendering the offspring infertile are rarely encountered. With the spread of humans, the two species come into regular contact and animals are not known for passing up the opportunity to mate. This problem has become so serious that the only way in which to now be 100% certain that you are looking at a pure wild cat is to take a DNA sample! That said, you can often distinguish a true African wild cat by its slightly longer legs with horizontal striping, and a reddish hue behind the ears. 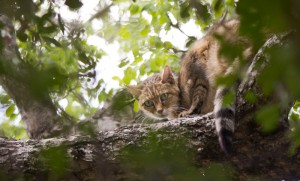 The process of domestication of wild cats occurred in ancient Egypt around 10,000 years ago. Cats were revered by the Egyptians as symbols of grace, fertility and motherhood. Such was their influence that in some cases, cats were even mummified and offered as sacrifices to the goddess Bast – a woman with the head of a cat. In 1888 a tomb was unearthed close to the town of Beni Hasan which contained over 80,000 mummified carcasses of cats and kittens, with the remains weighing in at around 20 tonnes! This proves just how respected the humble cat was in Egyptian culture.

For the standard guest to see an African wild cat in the wild is rare, but the students at Bushwise have the opportunity to see them on occasion in the Makalali Private Game Reserve. Recently I was also fortunate enough to come across one for the first time. This particular African wild cat was resting in a marula tree, perhaps trying to emulate its more illustrious cousin, the leopard. The reasons behind its choice to scale the tree will never be known, but tracks around the base of the tree suggested that a predator was to blame. Caracal tracks dotted the sand close to the trunk, inferring that the lightweight wild cat sought refuge from its pursuer in the treetops. Its lofty position allowed for some great shots as she nervously watched me from the safety of her arboreal haven.

It was once again a great example of not knowing what is going to be around the next corner, and that a career in field guiding is an adventure that lasts a lifetime!

All of Iriomotejima island to become national park 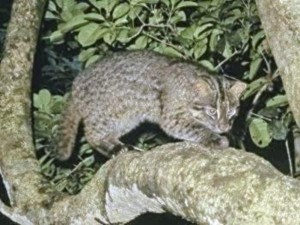 The Environment Ministry plans to expand the range of Iriomote-Ishigaki National Park to include the entirety of Iriomotejima island, a total of about 29,000 hectares, according to sources. The park currently comprises parts of Iriomotejima island and other areas in Okinawa Prefecture. The ministry will decide on the policy in its Central Environment Council soon and announce it in an official journal around late March. 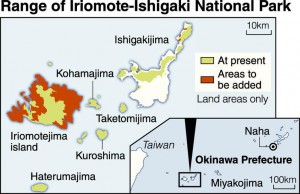 Currently, one-third of Iriomotejima, or about 10,800 hectares, is designated as the national park. By expanding the area, the ministry intends to strengthen its protection of rare animals, including Iriomote wild cats (see below), an endangered species designated as a special natural treasure, and preserve the original ecosystem on Iriomotejima.

The government aims to have the Amami-Ryukyu region, including Iriometejima, registered as a UNESCO World Natural Heritage site. Making the whole island a national park is also meant to promote that effort, the sources said.
According to the ministry, the island’s special protection district will be expanded to about 4,600 hectares from the current about 1,800 hectares. Even taking home fallen leaves is prohibited in this area. The ministry also plans to designate about 14,600 hectares, or about half of the island, as a class 1 special district where building construction is not allowed in principle.

There are five grades of regulation in national parks’ land areas. Regulations are strictest in special protection districts, followed by class 1, class 2 and class 3 special districts. Regulations in ordinary districts are the most loosely enforced.

Iriomote wild cats are wild cats that live only on Iriomotejima island. Adults are about 60 centimeters long, weigh three to five kilograms and eat such animals as lizards, frogs and prawns. About 100 cats are estimated to live on Iriomotejima. They are designated as a class-1A endangered species, which faces the highest danger of extinction.