From a ridge overlooking western Miaoli County, densely wooded hills roll off into the distant sea, the green canopy broken only occasionally by rice fields or rooftops. This is prime leopard cat territory, according to Chen Mei-ting (陳美汀), Taiwan’s foremost leopard cat researcher who has dedicated much of her life to the study of these shy, elusive felines. 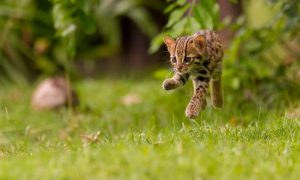 Taiwan’s only surviving wild cat, leopard cats are roughly the size of housecats with tawny black-spotted pelts and thrive in Taiwan’s lower elevations of around 500 meters. Areas that mix wilderness with agriculture are particularly hospitable for them as rice fields provide ideal habitats for leopard cats’ favorite prey: field mice and other rodents.
Yet despite the beauty and bounty of the Miaoli countryside, the green canopy hides a more ominous reality. While leopard cats are considered a species of “Least Concern” by the International Union for the Conservation of Nature (IUCN), as they are fairly pervasive across a wide range of habitats from Pakistan to Siberia and the Indonesian archipelago, the species is on the edge of extinction in Taiwan. Researchers with the Taiwan Endemic Species Research Institute (TESRI) under the Council of Agriculture estimate Taiwan’s leopard cat numbers at less than 500 animals divided into three isolated populations in Miaoli, Nantou, and Greater Taichung.

Borneo, the third-largest island in the world, is home to more endemic carnivores than any other island except Madagascar, and about half of them are threatened with extinction,thanks to habitat destruction and fragmentation resulting from logging, illegal hunting, and fires.But an international team led by researchers with the German Leibniz Institute for Zoo and Wildlife Research (IZW) and the International Union for Conservation of Nature and Natural Resources Species Survival Commission (IUCN SSC) has now published a “roadmap” for conservation efforts to save Borneo’s wild cats and small carnivores. 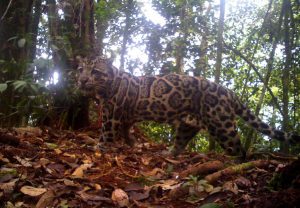