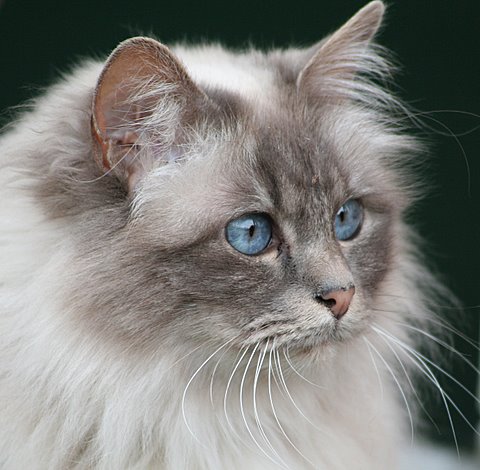 The Birman is a domestic cat breed. Also known as “Sacred Cat of Burma” (particularly so in some languages), it is not to be confused with the Burmese (cat), which is a separate and dissimilar breed. The Birman has a pale coloured body and darker points with deep blue eyes. The Birman breed is recognized by the Cat Fanciers’ Association (CFA).

The Birman cat is said to have originated in Burma, where it was considered a sacred companion cat of the Kittah priests. There is a legend (retold in various forms) as to how the Birmans developed their modern coloration: “Originally, the guardians of the Temple of LaoTsun were yellow-eyed white cats with long hair. The golden goddess of the temple, Tsun-Kyan-Kse, had deep blue eyes. The head priest, Mun-Ha, had as his companion a beautiful cat named Sinh. One day the temple was attacked and Mun-Ha was killed. At the moment of his death, Sinh placed his feet on his master. The cat’s white fur took on a golden cast; his eyes turned as blue as the eyes of the goddess, and his face, legs and tail became the color of earth. However, his paws, where they touched the priest, remained white as a symbol of purity. All the other temple cats became similarly colored. Seven days later, Sinh died, taking the soul of Mun-Ha to paradise.” 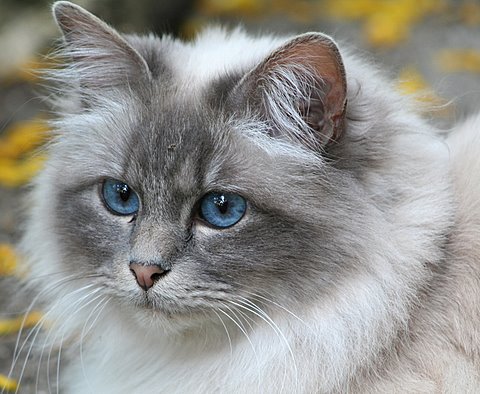 The more recent history of the Birman is almost as shrouded in mystery as its legendary origin. What is known for certain is that the breed appeared around 1920 in France. One story goes that around 1919, a pair of Birman cats was clandestinely shipped from Burma to France. The male cat did not survive the arduous journey but the female, Sita, survived and happily, was pregnant.

A perhaps-separate account (as quoted by professor Jumand in his ‘Le Chat’), is that two cats, a male and a female (whose name was Sita), were stolen and given to an American millionaire, Mr Vanderbilt, by a disloyal servant of the temple of Lao-Tsun, whilst Vanderbilt was sailing in the Far East. It reported that the pair was then given to a woman called Mme Thadde Hadisch. The male (again in this account) died on the boat, but the pregnant female gave birth in the French town of Nice in 1920 to a litter of kittens. One of the female offspring was splendid, and was then named Poupee. Poupee was bred with a Laotian Lynx. Baudoin-crevoisier, who has been documented as a top Birman breeder, confirmed this in an article written in 1933, “Poupee could not be bred by a male of that breed, but was bred to a Laotian Lynx cat belonging to a doctor in Nice. This type of cat resembles the Siamese, with very blue eyes, and this breeding produced young mongrels of Birmans and Laotians. Through successive breeding was born a perfect result – Manou de Madalpour, whose marks resemble her mother, Poupee.” Baudion then wrote in 1935, “This female was next bred to a male Siamese, which, at that time was baptised for the circumstances -Laotian Cat.” In 1933, Marcel Reney, who was attempting to unravel the truth of this mystery, wrote to the doctor in Nice, M. Prat. He wrote back, “We have had indeed several Siamese cats but know nothing of the origins. I know nothing of Mme Hadisch from Vienna.” 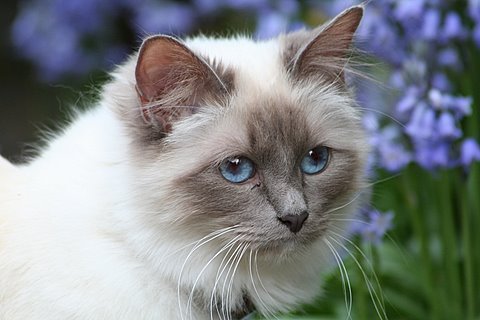 Marcel Reney also wrote to M. Guy Cheminaud, a hunter from the Far East who lived in Laos, and whose books on hunting of feral animals were illustrious, to determine what his view was on the “Lynx cat of Laos?” He replied, “There are no Laotian cats as a species distinct from the Siamese cat!”

Jumand and Baudoin’s entire timeline fell through, as the most significant witness, the owner of the legendary “Laotian Cat” knew nothing of either the lynx cat or Mme Thadde Hadisch. Mmme Marcelle Adams, who owned Manou de Madalpour, avowed to Marcel Reney that a certain Mme Leotardi, before strangely vanishing, had narrated the tale as Jumand and Baudoin wrote it down. In 1933, after an article by Marcel Reney was published in “Chasse, Peche, Elevage” trying to gain new information, Baudoin wrote in 1935 in “Son Altesse le Chat”, “Aside from the writings of Sir Russell Gordon and Auguste Pavie, no document gives the exact origin of these cats. After six years of research and ten years breeding offsprings in France, the Sacred Cat Of Burma still remains a mystery….”

Breed Development in and Beyond France

The breed known as “Sacre de Birmanie” was registered with the French Cat Registry in 1925. Birmans were almost wiped out as a breed during World War II. Only two cats were alive in Europe at the end of the war, a pair named Orloff and Xenia de Kaabaa, both belonging to Baudoin-crevoisier. The foundation of the breed in postwar France were offspring of this pair. Manou, Lon saito, Djaipour, Sita 1 and Sita 2, and they had to be heavily outcrossed with long-hair breeds to rebuild the birman breed. By the early 1950’s, pure birman litters were once again being produced. The restored breed was recognised in Britain in 1965 and by the CFA in 1966. 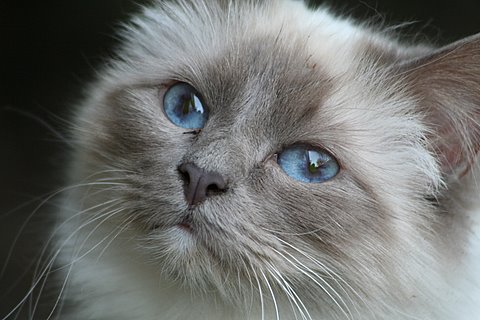 CFA reports that Birmans have been bred for being peaceful and friendly companions[cite?]. One of the basic characteristics of the Birman is that the color of the paws (should be white, according to the breed’s standards)[cite?], whereas the color of the legs must not blend or intermingle.

Birmans have semi-long, silky hair, a semi-cobby body and relatively small ears compared to other cat races. In order to comply with breed standards, the Birman’s body should be of an eggshell colour or golden, depending on the intensity of the markings colour. The markings can be pure seal, chocolate, blue, red, lilac or cream. Tabby variations are also allowed. Tortie cats can be seal, chocolate, blue or lilac. Birmans have sapphire coloured eyes.

The Birman’s coat is unusual due to the white ‘gloves’ on each paw. They are one of the few cat breeds in the colourpoint coat that has fingers and toes in pure white colour. The genetics of this feature may not be not fully clear, though a gene conferring the white ‘gloves’ has been identified.

All Birmans are born white (as other colourpoint kittens are) and they start developing their colours at the age of 1 week if they have a dark colour (as seal-point) and at the age of 14 days, or more, if they have a clear colour (as lilac-point). The first part which develops the colour are the points of ears, nose and tail. The real colour is complete at two years old and after a wintry season. 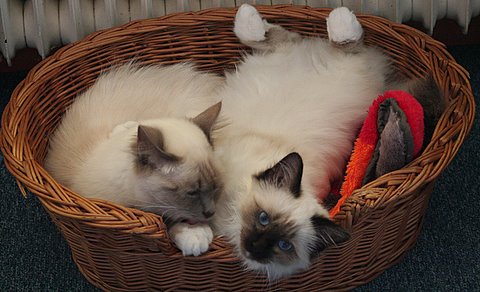 The only white area are gloves. A spot of white in other area is a fault in a Sacred Birman cat. Gloves are symmetrical in all four feet. The white must stop at the articulation or at the transition of toes to metacarpals, all fingers must be white too. Behind of the back paws these gloves finish with an inverted V extend 1/2 to 3/4. 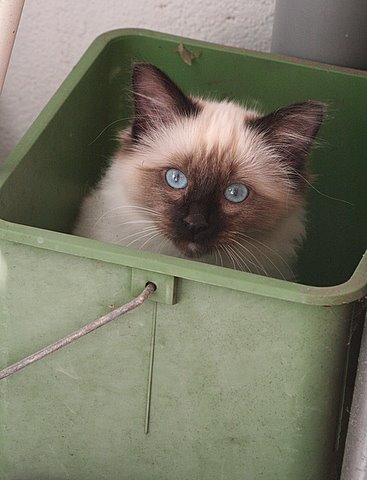 Birmans have been bred for their temperament, and companionship, and they form a great affinity with their owner and their family. As all cats, they are highly intelligent creatures, and seem to take a genuine interest in whatever is taking place around them. They are also very inquisitive, and playful, particularly when young, and require plenty of stimulation and attention.