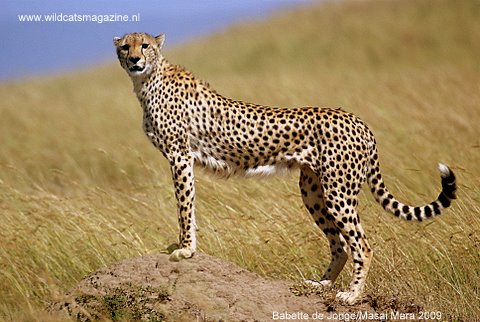 Founded in 1990, the Cheetah Conservation Fund (CCF) has as its mission is to be an internationally recognised centre of excellence in research and education on cheetahs and their eco-systems, working with all stakeholders to achieve best practice in the conservation and management of the world’s cheetahs.

The CCF is based in Namibia, the country with the largest and healthiest population of cheetahs left in the world. Its Research and Education Centre is located 44 km. east of Otjiwarongo.

Since its inception, the CCF has had a huge impact. The non-profit organization has developed a diverse range of programs to scientifically study cheetah physiology, its behavior, habitat, prey species and human and wildlife conflict issues. The results of these scientific studies are disseminated internationally via publications and presentations, and the ever-expanding scientific database is utilized to develop strategic education and conservation programs.

Both within Namibia and worldwide there is now far greater awareness of the value of the cheetah within the ecosystem, and its endangered status. Encouragingly, increasing numbers of Namibian farmers (on whose land the majority of wild cheetah live) are implementing predator-friendly livestock management techniques.

CCF believes that understanding the cheetah’s biology and ecology is essential to stabilise the population and manage its sustainability for the future. CCF actively works with local, national and international communities to raise awareness, communicate, educate and train.

CCF’s conservation and educational efforts are supported by on-going research to provide the base-line and long-term data necessary to understand the factors affecting the cheetah’s survival on Namibian farmlands. The research data is also used to develop policies and programs to sustain the cheetah population in Namibia and is used as a model for cheetah conservation programs in other countries such as Botswana, Kenya, South Africa, Algeria and Iran. CCF’s work includes the following program areas.

In order to influence national policy in favor of cheetah conservation, identify conservation priorities for cheetah, or assess the effectiveness of management action, CCF is currently developing indirect censusing techniques to provide consistent and reliable biological data. Building on long-term research on cheetah in Namibia, this project will field test and calibrate methods for cheetah censusing using camera-trap mark recapture and spoor (paw print) tracking. A cheetah genetics laboratory will provide support to the research and conservation endeavors necessary to save the cheetah, by using modern molecular techniques.

The overall goal of the program is to enhance the long-term survival of the cheetah and other key indigenous wildlife species on Namibian farmlands by developing a habitat improvement program that is both ecologically sound and economically viable.

The project also includes testing and monitoring methods of harvesting thickened (encroached) bush and design a scheme that is appropriate for farmland habitat and is beneficial to the landowners. CCF is developing an international market for bush-based products, Bushblok, that assures the long-term sustainability of appropriate levels of harvest. Within Namibia, CCF markets a firelog product as an affordable alternative to wood harvesting. Based on the results of the pilot project already conducted, habitat restoration efforts can be scaled up to restore cheetah habitat on an ecologically appropriate scale. This would also provide a long-term income-generating, self-sustaining conservation development project for the CCF.

Conducting intensive scientific research and publishing papers on research findings–in cheetah genetics, biology, ecology, health and reproduction, human impact, and species survival, including assistance with the management of captive and free-ranging cheetah throughout the world. The program adds to and maintains an extensive physiological database and a Genome Resource Bank.

Human effects on the cheetah

The CCF investigates non-lethal predator mitigation to eliminate the need for ranchers to kill cheetah, and issues relating to cheetah in captivity.

Aspects of this program include: