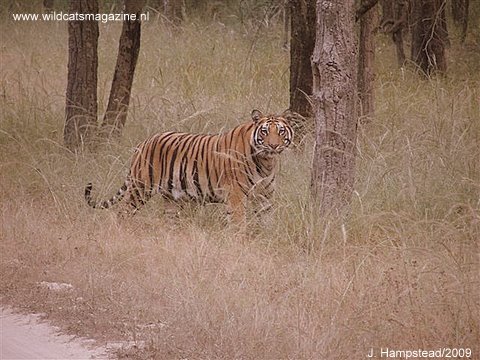 Global Tiger Patrol (GTP) is a conservation agency prioritising protection of the tiger in the field and funding projects that support Tiger and habitat conservation.

Founded in 1989, Global Tiger Patrol (GTP) is a conservation agency prioritising protection of the tiger in the field. If the wild tiger became extinct, most experts agree that it is extremely doubtful whether it could ever be reintroduced. The tiger, the pre-eminent symbol of the wild, would be gone forever, and with it, Asia’s wilderness.

GTP concentrates its work in India, as the subcontinent is home to about 50% of the world’s remaining wild tigers.

GTP’s expertise is tigers but its conservation work helps save Asia’s animals – from mighty elephants and rhinos to ants and beetles. As the tiger is at the top of the food chain, nature can only thrive under its umbrella. If the insects and animals that pollinate trees and fertilise the ground die out, the survival of the forests and jungles will be threatened.

Habitat conservation & reclamation: Without its habitat, the tiger cannot survive. GTP co-operates with and has contributed to local projects for reforestation, water conservation, alternative agriculture and energy technologies that save fragile habitat.

People-centred conservation: Without the support and co-operation of local people, the tiger has no chance of survival. Recognising that their economic and social concerns must be addressed, GTP has worked closely with the Ranthambhore Foundation (a pioneering people-centred conservation project) around the Ranthambhore National Park in Rajasthan and in Karnataka, south India (youth education projects); with the Institute of Climbers and Nature Lovers working in and around the Sundarbans Tiger Reserve; with Tarun Bharat Sangh, working with villages in and around Sariska National Park and also the Prakratik Society.

Research and data collection: To save the tiger, it is crucial to know numbers, where they live and how much they move in search of new territory and different mates (to maintain a healthy population). This calls for new tracking and monitoring systems and expert scientists to gather as much information as possible. GTP is supporting an on-going scientific research programme (see Annual Reports 2001 – 2004).