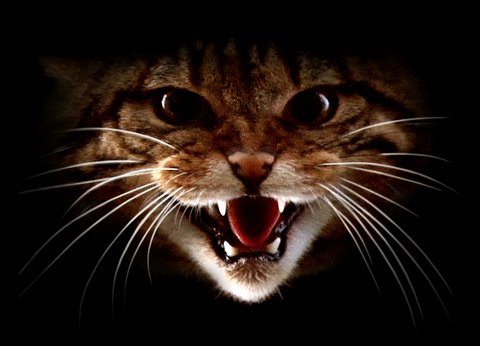 A new charity, the Scottish Wildcat Association, has been launched to champion the cause of Britain’s rarest mammal and last wild feline, amid fears that with less than 400 left in the wild extinction could be just 5 years away.

Resident in Britain for at least 2 million years wildcats have shared space with everything from woolly mammoths to cave lions and survived entire ice ages, but more recently have fallen foul of human persecution, urban development and, increasingly, hybridisation with domestic feral cats bringing numbers crashing down.

In 2004 scientists concluded that around 400 pure wildcats remained in the Highlands and developed an action plan to save them. 5 years down the line no apparent progress has been made and numbers seem to be falling even lower, whilst the Government body responsible for action, Scottish Natural Heritage, seem to be paralysed by inertia and keen to blame others for it, suggesting in the Times last week that shooting estates had sabotaged their efforts. SWA trustee Steve Piper comments;

“There has been a lot of talk and half hearted gestures like the recent wildcat population survey; it was so poorly funded the ecologists were left with nothing to work with, it was impossible to achieve the detail needed and everyone knew it. Shooting estates do cause wildcats a lot of problems but it definitely wasn’t their idea to fund a survey of one of the world’s rarest and most elusive creatures with pocket change; that was all SNH.”

The SWA plan to get things moving in the right direction and have already started to build an excited buzz amongst conservationists and the public; membership of the Association is open to individuals and commercial sponsors alike with national magazine Your Cat already running a special campaign to inject money into the largely voluntary captive breeding-for-release program.

Founded by Piper, a filmmaker who shot the acclaimed documentary Last of the Scottish Wildcats, the Association is also picking up strong support from the likes of “Cat Detective” Vicky Halls and Louise Rennison (author of the Georgia Nicholson books and recent Hollywood film), whilst naturalist and outspoken wildlife advocate Mike Tomkies has signed up as patron.

The Association is run voluntarily and keeps overheads to a minimum so that maximum funds, generated through memberships and donations, go on frontline projects such as the official captive breeding-for-release program, a range of awareness and educational campaigns and field conservation in the near future.

One such campaign is in partnership with charities including Advocates for Animals, Scottish Badgers and the International Otter Survival Fund to ban snares in Scotland. This has drawn widespread public support but strong opposition from many in the rural community who argue that snares are a cheap and essential pest control device, Piper elaborates;

“We need people like farmers and shooting estates to work with us saving the wildcat and we absolutely understand their financial and practical concerns regarding banning snares. That said snares are brutal and indiscriminate devices that kill many non-target species including wildcats and there are alternatives such as wildcats themselves; their staple food is rabbit, they defend their territory against foxes and feral cats and they don’t need a licence to kill hares.

“Wildcats also bring financial advantages as subsidy for any loss of grouse or rabbit damage with tourists willing to pay hundreds to sit in a hide just to catch a glimpse of this beautiful creature; that doesn’t have to mean coach loads of people trampling around the Highlands, it can be just a couple of wildlife watchers staying at the local B&B. That’s good economics for local communities and a much better option than dealing with a feral cat colony which is the inevitable alternative; surely it’s worth trying things differently to save an animal absolutely unique to Scotland and so intimately entwined with its history and culture.”

You can make donations or sign up as a member of the Association now at www.scottishwildcats.co.uk, which also includes a wealth of information on the cats, up and coming projects, some stunning photography provided by wildlife photographers Laurie Campbell and Peter Cairns and a shop selling wildcat related products like DVDs, books and artist David Mayer’s beautiful wildcat bronze all of which donate percentages of sales to the charity. Piper closes;

“Those who are elected and employed by the people to protect Scotland’s heritage are failing them; through us, the public and private sector have an opportunity to decide the future of this iconic creature themselves. Whether donating money, volunteering time or simply mentioning it to friends; now everyone really can play their part if they want to see Scottish wildcats here forever.”

To licence other images of Scottish wildcats in the wild contact;