Our dear friend and wildlife biologist, Shekhar Kolipaka, who’s studying the lesser cats, wrote the following proposal when he was working for the Indian Institute of Forest Management. Soon Shekhar will start a few new projects like the fishing cat in India and the Wildcat on the border of Holland/Germany. We’ll keep you informed on this website! Little know, small cats often get minimal to no funding. Research and Conservation Project Original (caracal) Project Introduction by Shekhar Kolipaka 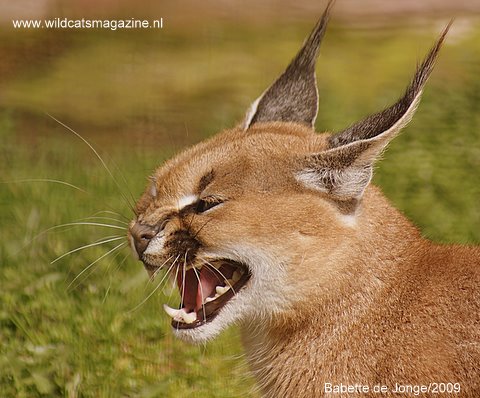 They were staring through the grills of the cage. The older father was leading a small cat with unusually large ears and the children were never allowed to go close to the animal it was a very ferocious cat, recalls the old palace guard. This description of the India caracal (felis caracal) by one of the palace guards, now around 90 years old, in the Ajay gadh (Panna Dist of Madhya Pradesh, India) maharaja’s palace is one of the last descriptions of the tamed Caracals employed for hunting the Indian gazelle.

Over the years the sightings of the Caracal became so rare that the Bombay natural history society reported less than 5 Caracal sightings in the entire country over the last 10 years (BNHS-1990 – 2001). Few researchers working on smaller cats and other carnivorous animals sighted the Caracals in the Ranthambore Tiger Reserve and Sariska Tiger Reserve (Shomita, 1989-90)

It is well known that there are 15 different varieties of wild cats in India. (WII). They can be classified as large, medium and small on basis of their body size. India also boasts of 80 National Parks and 441 Sanctuaries dedicated to protect its wildlife species. Unfortunately there are very few studies conducted on the lesser cats of India and one cannot be too sure of the viable populations of these cats in the country?

Efforts to study the lesser cats have been made in small quantities but there is a lot of work to be done before any conclusion can be reached out on the status of the lesser cats in India.

We are not certain where and how many of them exist. It is found that in the wild the tribes commonly refer lesser wild cats as jungli billi, jungle billaw, van billayya, van bilar (Central India only) so on and so forth and these local names differ from place to place. At the same time it is also found that the same tribes call one or more species of lesser wild cats with the same name and often this is very misleading.

This situation of unclear status remains the same for many lesser cats in India and only serious efforts using knowledge gained over the years in tracking lesser cats can save these wonderful wild felines.

Objective of the study – Establish concrete, pictorial evidence of existence of Caracals and other Lesser cats in the jungles of Central India.

Central India mostly comprises of Dry deciduous forests, Moist deciduous forests and Thorn and scrub forests. These habitats suit many forms of wild life and at least 6 species of lesser cats are known to exist in this ecosystem. They are:

Though reliable people over years sighted many lesser cats in central India there is very little concrete evidence that shows viable populations of the lesser cat habitat here (per comm. Raghu.C,) (A.S.Parihar, JBHNS, 1989). Very little information is available on the lesser cats of India because very few studies have been done on them.

This brings us to the very first question.

Do they still exist in the jungles of central India?.

If they do, then what are the various types of cats that exist in the Central Indian Jungles? Where do they exist? Does a particular species exist in more than one habitat type? What species of lesser cats have over lapping territories? What are they called locally? Inter and Intra specific interactions? What prey species do the lesser cats prey upon? Where do man-cat prey species overlap? (Areas where humans are preying on the same species of animals that the Lesser cats prey upon.) What densities of the cats exist in the areas of study? We must plot a distribution map of the lesser cats in the central Indian forests. Do the Rusty spotted cats exist in the Western Ghats? Do they dwell near human settlements? We must identify and suggest localized monitoring mechanisms to track and monitor lesser cats.

Once there is concrete evidence that lesser wild small cats do exist in a certain areas. Immediate, cost effective monitoring systems will be studied and suggested. The localized monitoring system will be used for identification and maintaining regular data on the status of the lesser cats. They will be identified and deployed after consultation with experts.

The study will bring out the distribution and the status of the lesser cats in central India. Possible, systematic and necessary measures can be taken to safeguard these relatively smaller, unknown cousins of the larger cats.

A map plotting the habitat spread of the lesser cats can be established for central India. This will greatly benefit future researchers and will also encourage many to attempt and study the elusive lesser cats.

The study will further help in suggesting localized monitoring mechanism wherever necessary. This is very important to minimize surprise cases of extinction like the case of the Asiatic cheetah of India. The information from the study will also be of vital importance to the forest department. The forest department’s annual census records some how do not cover the lesser cat in the Protected Areas. Once suitable identification and census procedures are established for monitoring lesser cats the forest department personnel can identify and record the details of any findings of these animals in their official records.

How the Project’s Outcome will be Evaluated

Data from the study will be collected periodically throughout the study and analyzed and presented to the concerned authorities as a report.

The findings will be presented to all the participating parties (Academic institutes, Forest Departments of involved states and the funding agencies) involved in the study.

a.. Here is a picture of a blue bull that was caught in Shekhar’s camera trap in the Panna Tiger Reserve.

b.. Here is a boar in the Chambal.

c.. Here is a Jungle Cat in the Chambal.

d.. Here is another shot of the Jungle Cat.