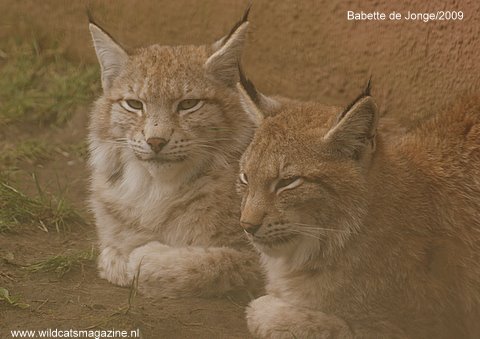 SOSLynx is an independent campaign organisation set up in 2000 to promote the conservation of the Iberian Lynx, and works at local and international levels.

The Iberian lynx (Lynx pardinus), sometimes referred to as the Spanish lynx, is a critically endangered feline mammal native to the Iberian Peninsula in Southern Europ, being the most endangered feline species in the world. According to SOS Lynx, if this species died out, it would be the first feline extinction since prehisotic times. The species often used to be misclassified as a subspecies of the Eurasian lynx (Lynx lynx), but is now considered a separate species. Both species occurred together in central Europe in the Pleistocene epoch, being separated by habitat choice. The Iberian lynx is believed to have evolved from lynx issioderensis.

SOS Lynx is a non-for-profit association that works in a number of areas including: awareness raising; lobbying; researching, writing, and publishing reports, and; producing materials for use in schools and with hunters and rural landowners. In the future we also aim to: expand our education work; initiate habitat and rabbit recovery in Portugal, and; work directly with hunters, landowners and policymakers to reduce threats to the Iberian Lynx and other top predators in Portugal.

Most of their work is conducted by volunteers. Thus, all of your donation will go towards funding their important work.