With special thanks to Dharmendra Khandal, Ph.D and Divya Shrivastava. 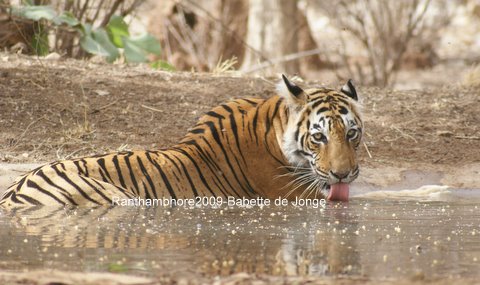 A glimpse of the jungle God is all that the tourists ask for when they go to the forest. This beautiful yet mysterious cat is the object of awe and respect for humans and animals alike.

Since ages, the tiger has influenced many writers, thinkers, artists and photographers with its charming mysterious beauty and valour… In mythology tiger has been the vahana (vehicle) of Goddess Durga. The beautiful beast are shown in the cave paintings of prehistoric era, on the seals from the ancient Indus civilization, and many historic objet d’art showing their powerful presence even then… Today it finds its way on the postal stamps, post cards, and various books giving us a peek each time.

Photographers find it to be the ultimate subject for their frame, they travel from world over to take the tiger and its memories home in their cameras. ..

The tiger has existed in various parts of the world, splitting the tiger population to nine different subspecies depending on the habitat, climatic conditions, prey base, etc however of these 3 subspecies engulfed in the sand of time…

Tigers hunting became a sport during the British era and from nearly 40,000 tigers in the wild in India in 1900, the population shrunk to a few thousands.. . The Maharajas and royals with their foreign guests continued to hunt down the golden gods along with other big cats to get them to a shrinking population… with the whip of hunting and the increased urbanisation the last of the Cheetahs vanished – but the tiger – is a true fighter… It survived. The tiger outlasted the game sport back then and has remained alive even with the modern day hurdles it faces for its survival.

Shikar existed until 1970’s, with the country having many ‘Hunting Reserves’. However with efforts of some prominent conservationists of that time like M. Krishnan, Kailash Sankhala and others the issue of abating tiger population – The First Tiger Crisis – was raised in front of the then Prime Minister Indira Gandhi who took a personal initiative to drive the cause of Saving the tiger population.

In 1972, a body was formed in the leadership of Kailash Sankhala called “Project Tiger” was created to combat the first tiger crisis.

Specially constituted tiger reserves were created with the aim to conserve the tiger population and their habitat.

Looking at the tiger density across the state’s nine tiger reserves were established during the year 1972 – 1973.

In the history of wildlife conservation – Project Tiger was one of the most successful conservation efforts undertaken ever.

However relying on the past achievement the Indian Government forgot the present day and that was an invitation – The Second Crisis – which befell on the lord of the Jungle.

Fateh Singh Rathore warned the department of decreasing tiger population in Rajasthan reserves, which was ignored. However, the world was staggered when a tiger skin and bones were seized in Ranthambhore in 1993. Why?

The government ordered a census and a melancholic figure of just 2000 tigers came in front. This crisis exposed that the golden god was being used in Chinese medicines, tiger wines and beauty products in addition to being hunted for its skin.

Tiger protection continued and several laws were made against poaching, numerous movements happened to ‘Save the Tiger’… but the catastrophe continued and the tiger faced – The Third Crises – which questioned its survival. .. 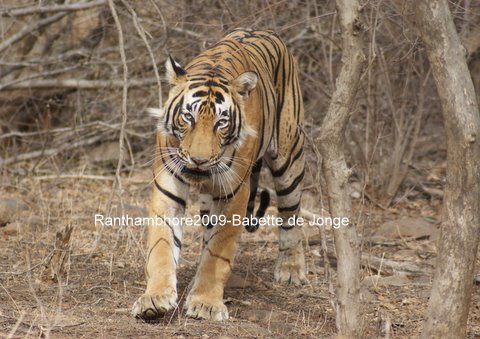 In 2004, an NGO named Tiger Watch, which works in Ranthambhore carried out a research activity in the Ranthambhore National Park and came out with an obnoxious discovery of nearly 25 missing tigers!

All these pushed the government to set up a “Tiger Task Force”. The tiger task force confirmed a figure of 26 tigers in Ranthambhore as compared to the overdrawn figure of 47 tigers.

And this was the third blow to the tiger population.

In the country today, of the 37 tiger reserves just nine reserves are said to be in healthy condition. One of them one is Ranthambhore Tiger Reserve.

Ranthambhore the name comes from two hills Ran and Thanbhor located in the region. Also a legend says that Ranthambhore was once called Ranastambhapura or City of the Pillars of War.

This 392 sq. km. Dry deciduous tiger reserve of Rajasthan is beautifully enclosed by the Banas and Chambal River on two sides. It is a small park but has been the golden gods’ home since centuries.

Many will question as to why Ranthambhore is important for the tigers and why not Tadoba or Kanha?

Although all are significant tiger habitats – Ranthambhore is a unique landscape. Many areas of the Aravalli were populated with tigers but today the big cat resides only in Ranthambhore and it is the hope for the neighbouring sanctuaries of Rajasthan like Keladevi, Sariska and Sawai Mansingh Sanctuary.

An amazing thing is that the mighty cat here lives in blazing 45ø Celsius temperatures, on the other end in its family is the Siberian tiger living in freezing minus 45ø Celsius. Hence it is – Ecologically a very significant habitat.

This park has limited water sources and sandy terrain so it gets very easy to spot tiger and hence world over tourists prefer this place as one gets to see not just the tiger, but also its behavior like raising the cubs, territorial fights, hunting, relationship with other tigers – which not many parks can boast of… Many of the tigers shown on the television screen are filmed here; they share candid stories of their lives with us…

Apart from this, Ranthambhore has always been a “Temple of Conservation”; many models of conservation have been picked up from here.

Tiger Watch has been working in Ranthambhore since the past 11 years, although Tiger Watch is a Mumbai registered NGO under the Bombay Public Trusts Act (www.tigerwatch.net). A Mumbai based businessman and more importantly a wildlife

partisan, Ashutosh Mahadevia joined hands to work on this crusade. Since 20 long years, Ashu Bhai has worked religiously for Tiger Conservation in Ranthambhore.

In the initial phases, Tiger Watch worked with the forest department assisting them with multifarious support like organizing various training program for the forest personnel’s to develop their skills, morale, arranging equipments and material support, etc.

Also, to date with pursuit to motivate the guards, Tiger Watch runs a unique “Hero of Ranthambhore” award – where each month a forester or police man with excellence in service towards wildlife is facilitated with a cash award of Rs. 5000/- and a appreciation letter.

Tiger Watch also carries out diverse research programs on the flora and fauna in and around the park. Studies included the mighty cat Tiger to wolves and foxes, plants like P. juliflora a Mexican tree, snakes and reptiles, prey base and various other studies with the dedicated volunteers. In addition, since two years Tiger Watch has conducted a Gharial survey – for the monitoring of the endangered crocodilian species, along the Chambal River.

After the discovery of the missing tiger situation in 2004, Tiger Watch conducted an extensive Anti-poaching campaign. In this, it was revealed that the main culprits for the missing tigers were the Mogya’s.

In the 16th century, King Akbar routed and chased out the Mogya’ warriors out in the forest. Since then the Mogya community got detached from the mainstream society and started living a semi-nomadic life. They ameliorated their art of hunting and resorted to banditry.

Today most Mogya’s live along the periphery of the forests, most living in illiteracy and in marginal existence. However, The Police forces of three states have reported that these are hardcore criminals and their reform is impossible. Their belief is not baseless either; investigations have revealed that – Mogya’s alone have killed at least 20 to 25 tigers in the last three years. This number is more than half of the entire population of Ranthambhore national park. The big poaching mafias easily exploit these poor people to keep the wildlife trade going. Without the Mogya’s it would be square odds to get wildlife trade rolling.

Mogya’s keep moving in search of work, during harvesting they get jobs in the villages to guard crops from the wild animals that may stray out of the park. So ultimately – whether poaching or crop protection from wild animals – Hunting remains their best chance of survival.

Tiger Watch has since its first operation in 2004 got 47 poachers behind bars. Most of them get out on bail due to the wispy laws governing the wildlife.

Understanding that the lack of knowledge, skill, funds and other resources undermine the Mogya’s to resort back and again to poaching Tiger Watch got on ground to rehabilitate the Mogya community. The Mogya’s need to be guided in these tasks to live ethically and have a sustainable livelihood.

Tiger Watch devised a multifaceted rehabilitation program for the Mogya community where in all the age groups were targeted.

But at the same time the philosophy the organization follows is of the ‘Carrot and stick’ policy.

Mogya men were roped in the anti-poaching information network where they provide the inside news and happenings of this impenetrable community. The main reason of leaking out information is simple, most of the times it is the monitory rewards that come with it or the need to even out old scores. Nevertheless today, some of them do understand the importance of a clean and straight life and have come under this program.

Empowering a woman is equal to empowering the entire household… same holds true to the Mogya woman, hence with the efforts of a Green teacher – Madhu Bhatnagar from Delhi’s Shri Ram School – the Handicraft program started and the idea of this project is to enable them to learn new skills and techniques to help them start a commercial venture. Now these ladies weave baskets, make tea coasters and bed sheets, gudhri’s and little trinkets that are sold, give them some profit. The project struggles with lack of resources but is alive and does have bright prospects.

The Mogya ancestors were warriors and great hunters, but being chased out of the mainstream society the next generations were engulfed in poaching and robbery… the raison d’être was illiteracy. Hence, Tiger Watch fabricated the Mogya Children Education Program, 80 Mogya children are on the road to seeing an educated life.

In this program, the Mogya Girls attend a day school close to their houses, in the Hindwad village on the purlieu of Ranthambhore National park. It is not easy to bring them to school as the parents often engage them in grazing goats and agricultural works, therefore a small incentive pay is given to the parent to engage the girl child in the education program.

The Mogya Boys Education Program, which is blessed with generous supporters, has seen its sunny day. The hostel was recently shifted from the Phalaudi village to Sawai Madhopur city, which promises better schooling and living facilities for the odd 40 Mogya boys.

In the Mogya community an average of 20% suffer from ailments like TB, piles, and other severe diseases. Hence in concurrence with Ranthambhore Sevika Hospital (Run by the Prakritik Society), Tiger Watch initiated the Healthcare program where the Mogya families under the umbrella of the rehabilitation program are to get free medical treatment and subsidised medical aid. Of the 500 Mogya families, nearly half have the healthcare card today. Major operations like – amputations, tumor removal and plastic surgeries have been carried out free for some community members.

The mighty dinosaurs that existed in the past… we were told about their gigantic existence… Man made imaginary films on the dinosaurs – as there were no more left for us to see. Similarly, if today not acted upon in near future we might show such fictional films to our kids or grandkids in place of real life documentary!

We have already lost the three subspecies from the tiger family – the Caspian, Javan and Bali Tigers.

Do you want to help? Join the Tiger Watch anthem…