It is one of only two felids for which no subspecies have been classically described. They cannot live in captivity. All Andean mountain cats died as soon as they were captivated. Fewer than 2500 individuals are thought to exist. This cat is one of about two dozen small wild cat species found around the world. Unlike their larger cousins, such as lions and tigers, with millions of dollars dedicated to conservation efforts, small wild cats like the Andean Mountain Cat have not found a place in the hearts of the public, and conservation efforts exist on budgets in the thousands.

The Andean Mountain Cat’s preferred high-elevation montane habitat is fragmented by deep valleys, and its distribution is likely to be further localized by the patchy nature of colonies of its preferred prey, mountain viscachas. The total effective population size could be below 2,500 mature individuals, with a declining trend due to loss of prey base and habitat, as well as to persecution and hunting for traditional ceremonial purposes, and no subpopulation having an effective population size larger than 250 mature individuals.

While the Andean Mountain Cat’s main prey likely is the mountain viscacha, it is also probable that mountain chinchillas were previously important prey of the Andean Mountain Cat, before their populations were drastically reduced due to hunting for the fur trade. Since it lives only in the high mountains, human-inhabited valleys act as barriers, fragmenting the population, meaning that even low levels of poaching could be devastating. It is often killed in Chile and Bolivia because of local superstition. 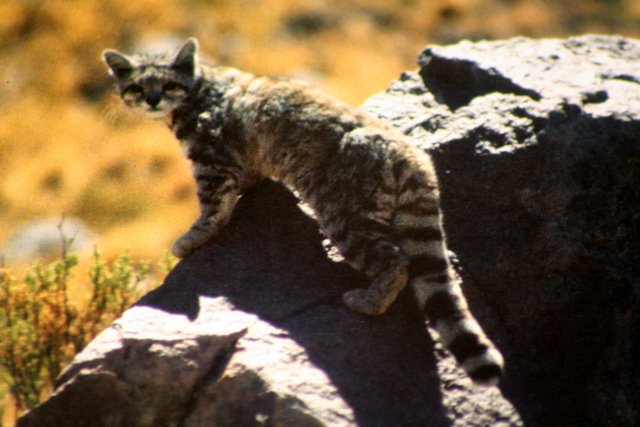 Sanderson is still heavily involved with the Andean Cat. With coworkers Constanza Napolitano, Lilian Villalba, and Eliseo Delgado and many others in the Andean Cat Alliance, the Small Cat Conservation Alliance (SCCA) has forged conservation agreements with Fundación Biodiversitas, a Chilean non-profit organization, and CONAF, the government agency responsible for managing national parks and production forests. CONAF has agreed to allow the SCCA to renovate a building for the Andean Cat Conservation and Monitoring Center on their already functioning compound at San Pedro de Atacama in Chile.

Villalba of the Andean Cat Alliance conducted a major research program, including radio-telemetry studies, from 2001 to 2006 in the Khastor region of southern Bolivia. Exclusively for Wild Cats Magazine she and her colleagues wrote THIS ARTICLE.