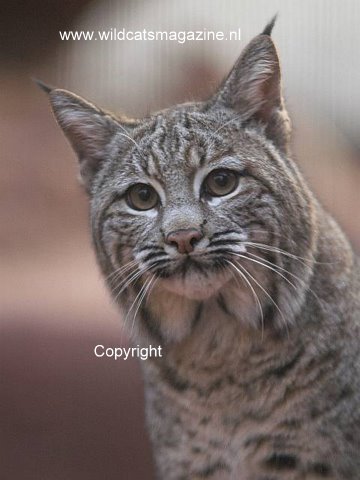 The Bobcat, or red lynx, (Lynx rufus) with his grey to brown coat, whiskered face and black-tufted ears resembles the other species of the mid-sized Lynx genus, though it is smaller than the Canada Lynx, with which it shares parts of its range. It is about twice as large as the domestic cat and it derives its name from the black-tipped stubby tail.

The Bobcat resembles other species of the Lynx genus but is on average the smallest of the four. It is believed to have evolved from the Eurasian lynx, which crossed into North America. Its coat is variable, though generally tan to grey and reddish brown (that’s why it is also called Red Lynx), with black streaks on the body and dark bars on the forelegs and tail. Its spotted patterning acts as camouflage. The ears are black-tipped and pointed, with short black tufts. There is generally an off-white color on the lips, chin, and underparts. Bobcats in the desert regions of the southwest have the lightest colored coats, while those in the northern, forested regions are darkest. Kittens are born well-furred and already have their spots. A few melanistic Bobcats have been sighted and captured in Florida. They appear black, but may actually still exhibit a spot pattern.

The face appears wide due to ruffs of extended hair beneath the ears. The fur is brittle but quite long and dense. The nose of the Bobcat is pinkish-red, and it has a base color of gray or yellowish- or brownish-red on its face, sides, and back. Bobcat eyes are yellow with black pupils. The pupils are round black circles and will widen during nocturnal activity to maximize light reception. The cat has sharp hearing and vision, and a good sense of smell. It is an excellent climber, and will swim when it needs to, but will normally avoid water. With twelve recognized subspecies the North American member of the cat family, Felidae, ranges from Southern Canada to Northern Mexico, including most of the continental United States. Although Bobcats have been hunted extensively by humans, both for sport and fur, their population has proven resilient. They are adaptable predators inhabiting wooded areas as well as semi-desert, urban edge, forest edges and swampland environment. 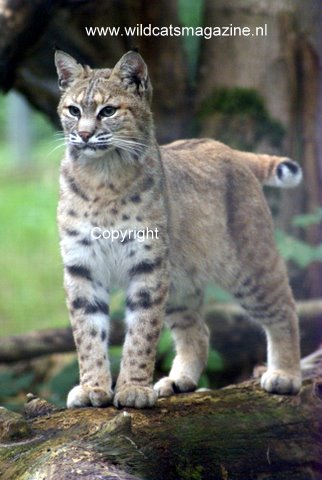 The Bobcat hunt anything from insects and small rodents, rabbits and hares, to deer. Prey selection depends on location and habitat, season, and abundance. Like most cats, the bobcat is territorial and most of the time solitary, although there is some overlap in home ranges. It uses several methods to mark its territorial boundaries, including claw marks and deposits of urine or feces. The Bobcat breeds from winter into spring and has a gestation period of about two months. The male Bobcat has several females in his territory and it happens so that he feeds all females with cubs the first time and also joins them when the cubs first learn to hunt. After this he will soon lose interest and continues his solitary life again. A very busy time for the male Bobcats esp. when a few females have a litter at the same time.

One to six, but usually two to four, kittens are born in April or May, after roughly 60 to 70 days of gestation. There may sometimes be a second litter, with births as late as September. The female generally gives birth in some sort of enclosed space, usually a small cave or hollow log. The young open their eyes by the ninth or tenth day. They start exploring their surroundings at four weeks and are weaned at about two months. Within three to five months they begin to travel with their mother. They will be hunting by themselves by fall of their first year and usually disperse shortly thereafter.

They generally begin breeding by their second summer, though females may start as early as their first year. Sperm production begins each year by September or October, and the male will be fertile into the summer. A dominant male will travel with a female and mate with her several times, generally from winter until early spring; this varies by location, but most mating takes place during February and March. The pair may undertake a number of different behaviors, including bumping, chasing, and ambushing. Other males may be in attendance, but remain uninvolved. Once the male recognizes that the female is receptive, he grasps her in the typical felid neck grip. The female may later go on to mate with other males, and males will generally mate with several females. During courtship, the otherwise silent Bobcat may let out loud screams, hisses, or other sounds. 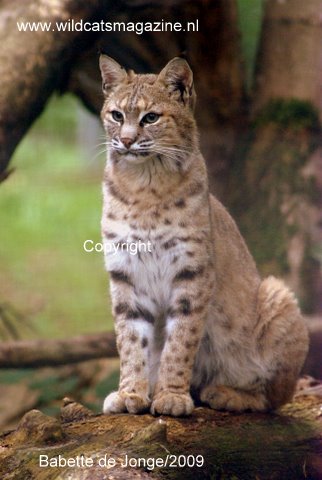 The Bobcat is crepuscular. It keeps on the move from three hours before sunset until about midnight, and then again from before dawn until three hours after sunrise. Each night it will move from 2 to 7 miles (3.2 to 11 km) along its habitual route. This behavior may vary seasonally, as Bobcats become more diurnal during fall and winter. This is a response to the activity of their prey, which are more active during the day in colder months.

Bobcat activities are confined to well-defined territories, which vary in size depending on gender and the distribution of prey. The home range is marked with feces, urine scent, and by clawing prominent trees in the area. In its territory the Bobcat will have numerous places of shelter: usually a main den, and several auxiliary shelters on the outer extent of its range, such as hollow logs, brush piles, thickets, or under rock ledges. Its den smells strongly of the Bobcat. Like most felines, the Bobcat is largely solitary but ranges will often overlap. Unusually for a cat, males are more tolerant of overlap, while females rarely wander into others’ ranges. Given their smaller range sizes, two or more females may reside within a male’s home range. When multiple male territories overlap a dominance hierarchy is often established resulting in the exclusion of some transients from favored areas.

The Bobcat is able to go for long periods without food, but will eat heavily when prey is abundant. During lean periods, it will often prey on larger animals that it can kill and return to feed on later. The Bobcat hunts by stalking its prey and then ambushing it with a short chase or pounce. Its preference is for mammals about 1.5 to 12.5 pounds (0.68 to 5.7 kg). Its main prey varies by region. In the eastern United States it is the Eastern Cottontail species, and in the north it is the Snowshoe Hare. When these prey species exist together, as in New England, they are the primary food sources of the Bobcat. In the far south, the rabbits and hare are sometimes replaced by Cotton Rats as the primary food source. 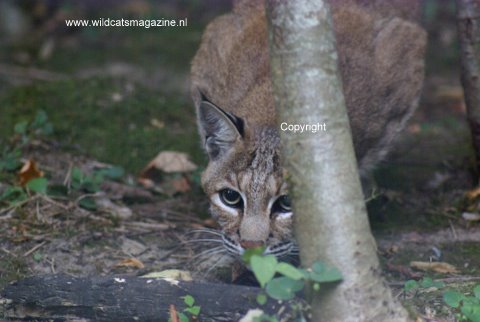 As an opportunistic predator, unlike the more specialized Canadian Lynx, it will readily vary its prey selection. Research has shown that diet diversification positively correlates to a decline in numbers of the Bobcat’s principal prey; the abundance of its main prey species is the main determinant of overall diet. The Bobcat hunts animals of different sizes, and will adjust its hunting techniques accordingly. With small animals, such as rodents,squirrels, birds, fish and insects, it will hunt in areas known to be abundant in prey, and will lie, crouch, or stand and wait for victims to wander close. It will then pounce, grabbing its prey with its sharp, retractable claws. For slightly larger animals, such as rabbits and hares, it will stalk from cover and wait until they come within 20 to 35 feet (6.1 to 11 m) before rushing in to attack. Less commonly it will feed on larger animals such as foxes, minks, skunks, small dogs and domesticated cats. Bobcats are considered the major predatory threat to the endangered Whooping Crane. Bobcats are also occasional hunters of livestock and poultry. While larger species such as cattle and horses are not known to be attacked, Bobcats do present a threat to smaller ruminants such as sheep and goats. According to the National Agricultural Statistics Service, Bobcats killed 11,100 sheep in 2004, comprising 4.9% of all sheep predator deaths. However, some amount of Bobcat predation may be misidentified, as Bobcats have been known to scavenge on the remains of livestock kills by other animals.

It has been known to kill deer, especially in winter when smaller prey is scarce, or when deer populations become more abundant. One study in the Everglades showed a large majority of kills (33 of 39) were fawns, but that prey up to eight times the Bobcat’s weight could be successfully taken. It stalks the deer, often when the deer is lying down, then rushes in and grabs it by the neck before biting through the throat, base of the skull, or chest. On the rare occasions that a Bobcat kills a deer, it eats its fill and then buries the carcass under snow or leaves, often returning to it several times to feed.

Bobcats typically live to six or eight years of age, with a few reaching beyond ten. The longest they have been known to live is 16 years in the wild and 32 years in captivity.