The Bornean Clouded Leopard is a medium-sized wild cat (belongs to the group of small felines though) found on Borneo, Sumatra and the Batu Islands in the Malay Archipelago and publicised under that name by the World Wide Fund for Nature (WWF) on March 14, 2007. The species was previously found in Java, but has not been recorded there since Neolithic times.

The coat of the Bornean Clouded Leopard is marked with irregularly shaped, dark-edged ovals which are said to be shaped like clouds, hence its common name.
Because the Bornean Clouded Leopard’s habits make it difficult to study, exact figures of its population do not exist. However, recent studies and filming (Dr Robert Martin) estimate the population to be between 5,000 and 11,000 great cats left on Borneo, and 3,000 to 7,000 on Sumatra. In the countries of its native range, hunting of the Clouded Leopard is prohibited. However, these bans are very poorly enforced.

Encroachment upon and complete destruction of the Bornean Clouded Leopards’ natural habitat, primarily by logging and the creation of rubber and palm oil plantations, continues to threaten the whole fauna of Borneo. 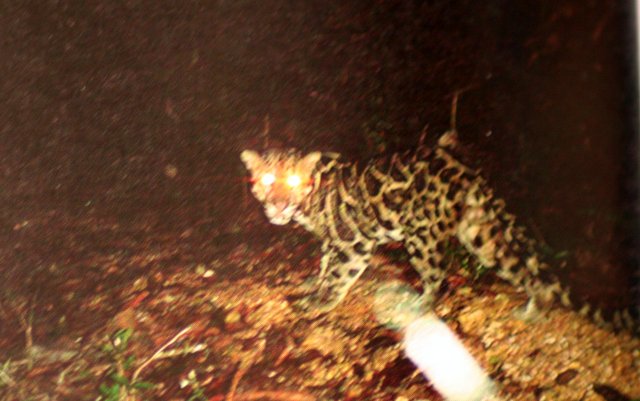 Though scientists have known of its existence since the early 19th century, it was positively identified as being a distinct species in its own right in 2006, having long been believed to be a subspecies of the mainland Clouded Leopard(Neofelis nebulosa).(see description on this website). However, genetic research results clearly indicate that the clouded leopard of Borneo should be considered a separate species”.
A recent study conducted in 2006, focusing on classifying tracks found in Sabah (northeastern Borneo), placed an estimate on the population: 1,500-3,200 cats in Sabah, with only 275-585 of them in large protected reserves.