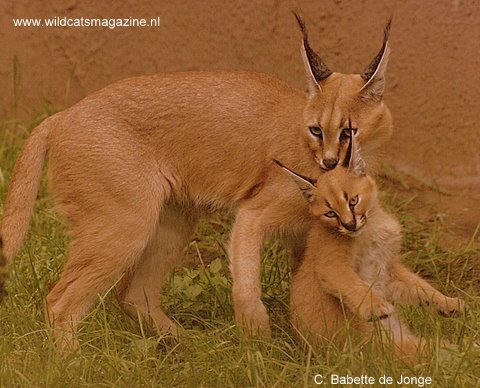 Caracal means ‘black ears’ in Turkish. Large, tapering ears with five cm erect tufts of black hair, used for communication, are probably the most unique feature of this cat. Black backed ears, dark spots on both sides of the muzzle, black spots above the eyes and a black stripe from the eye to the nose break up an otherwise uniform tawny-brown to brick-red coloring. Eyes are large and yellow brown. The short, dense coat is slightly longer and whiter on the underside. Females are smaller than the males. Although they are called ‘desert lynx’, caracals have longer legs, a more slender body, and the tail is considerably longer than true lynx. They also lack the ruff of hairs around the face which are so predominant in the northern cats. Melanistic caracals have been reported, though only rarely. 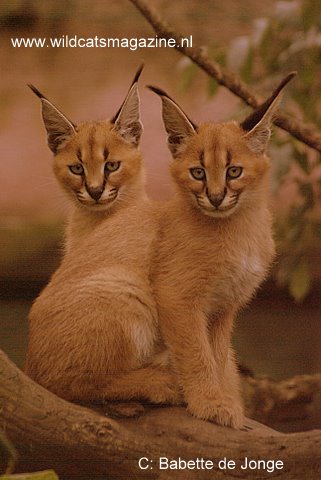 Essentially an animal of dry regions, the caracal has a wide habitat tolerance. They are found in woodlands, savannahs and acacia scrub throughout Africa; jungle scrub and deserts in India; and arid, sandy regions and steppes in Asia. As a desert animal, they can survive long periods without drinking. During the hot hours of the day, they rest in crevices, and hunt mainly in the cooler morning, night and evening hours. Their gait is similar to the cheetah Acinonyx jubatus, but they are not sprinters, and take to the trees if pursued by dogs. Although they can be considered the fastest cat of their size, their hunting technique is the stalk and spring method like that of the domestic cat. Males have a home range which includes that of several females, and as solitary animals they come together only for mating. In South Africa, adult male home ranges were 31 – 65 square km, while those of the females were four to 31 square km. 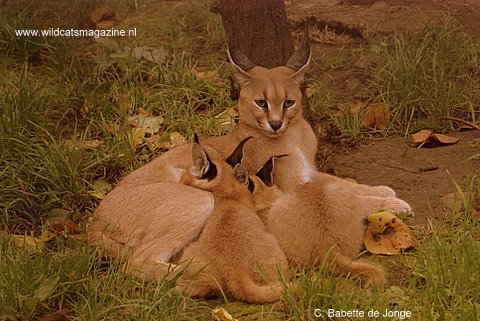 Caracals are remarkable jumpers, and can jump several feet into the air to knock flushed birds down with their paw. Ten to a dozen pigeons at one time can be taken this way, and the caracal was once tamed and trained for bird hunting in India and Iran. This is the origination of the expression ‘to put a cat amongst the pigeons’. They were put in arena containing a flock of pigeons, and wagers were made to see how many they would take down. They were also used to hunt antelope, hares, and foxes, much like the cheetah in Africa. When consuming birds, they pluck the larger ones before eating, and eat the smaller ones whole. Other prey items include rodents, hares, small antelope, carrion and reptiles, including poisonous snakes. New grass or fruit is also sometimes eaten, probably for the moisture content. A kill is often dragged into dense cover where it can be eaten without disturbance. Large prey animals are covered with grass after the initial feeding, to be consumed later.

Like most species of cat, the caracal is predominantly nocturnal, travelling up to 20 km per night in search of food. Sleeping is done in burrows, rock crevices or thick bush, sometimes in trees. Vocalizations are few, mainly growls and spits in anger, and a loud barking sound used to call their partners. As with other desert animals, their sight and hearing are very good and they have a moderate sense of smell. 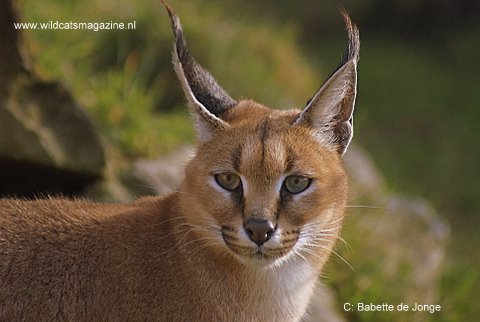 After a 78 – 81 day gestation, one to four kittens are born in a burrow, crevice, or dense patch of brush lined with fur and feathers. Newborns are darker and greyer than the adults, with reddish belly spots that fade as they age. The kittens can open their eyes on the first day of life, but they are not completely open for six to 10 days. When they are about three weeks old, the mother takes them from the birth burrow to another location, and continues to move the family on a regular basis. At four to five weeks of age the young are very active and make a chirping, birdlike vocalization. They are weaned at about ten weeks, and remain with their mother for up to a year. Sexual maturity is reached around 12 – 16 months.

These cats are fairly common in zoos, and breed well. Further work is needed on subspecies identification of these cats, like many of the small cats. They have lived up to 19 years in captivity. 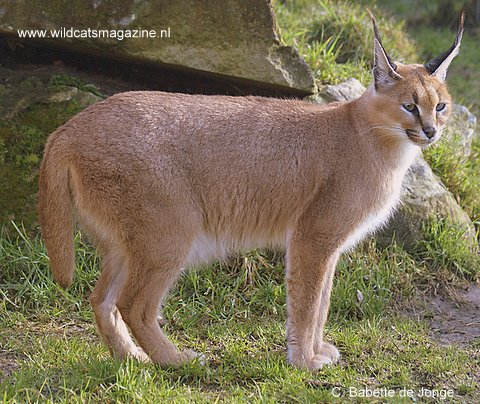 The actual number of caracal in the wild is unknown. They are considered rare or threatened in Asia and North Africa; widespread in South Africa and hunted as a poultry raider wherever they are found. Poisoned carcasses are put out by ranchers to kill predators, which kill a variety of carnivores. Caracals are most abundant in South Africa and Namibia, where their range is expanding, possibly due to extirpation of black-backed jackals by farmers. An additional threat is severe habitat loss, as people move further into their territory, and their prey species are driven out. The Indian subspecies is now thought to be highly endangered. The African population is not protected over most of their range, while the Asian population is protected over half of their range. CITES has placed the African population on Appendix II, and the Asian population on Appendix I.