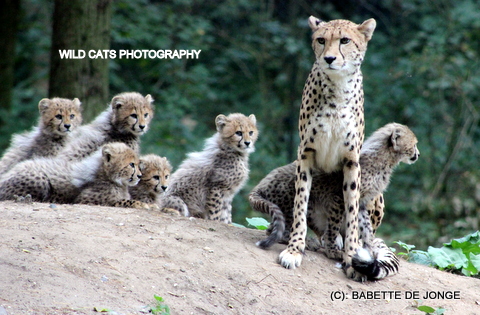 The cheetah is an atypical member of the cat family that is unique in its speed, while lacking climbing abilities. As such, it is placed in its own genus, Acinonyx. It is the fastest land animal, reaching speeds between 112 and 120 km/h (70 and 75 mph) in short bursts covering distances up to 460 m (1,500 ft), and has the ability to accelerate from 0 to 110 km/h (68 mph) in three seconds, faster than most racing cars.

The cheetah’s chest is deep and its waist is narrow. The coarse, short fur of the cheetah is tan with round black spots, affording it some camouflage while hunting. There are no spots on its white underside, but the tail has spots, which merge to form four to six dark rings at the end. The tail usually ends in a bushy white tuft. The cheetah has a small head with high-set eyes. Black “tear marks” run from the corner of its eyes down the sides of the nose to its mouth to keep sunlight out of its eyes and to aid in hunting and seeing long distances. Although it can reach high speeds, its body cannot stand long distance running. It is a sprinter. 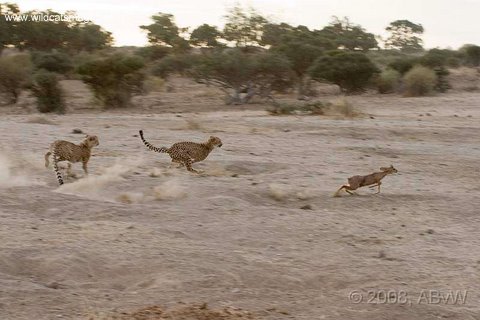 The adult cheetah weighs from 40 to 65 kg (88 to 140 lb). Its total body length is from 115 to 135 cm (45 to 53 in), while the tail can measure up to 84 cm (33 in) in length. Males tend to be slightly larger than females and have slightly bigger heads, but there is not a great variation in cheetah sizes and it is difficult to tell males and females apart by appearance alone. A cheetah is NOT a leopard. The cheetah is generally shorter-bodied, but is longer tailed and taller and so it appears more streamlined. A leopard is heavier and often more agressive than a cheetah. 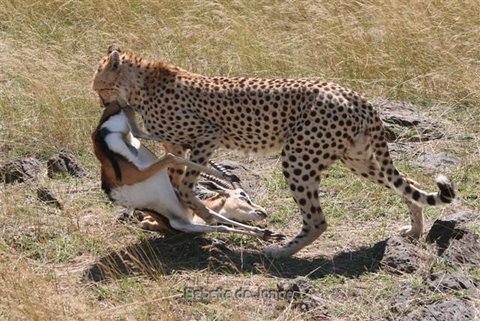 Some cheetahs also have a rare fur pattern mutation: cheetahs with darker, larger, blotchy, merged spots are known as ‘king cheetahs’. It was once thought to be a separate subspecies, but it is merely a mutation of the African cheetah. The ‘king cheetah’ has only been seen in the wild a handful of times, but it has been bred in captivity.

The cheetah’s paws have semi-retractable claws (known only in three other cat species – the Fishing cat, the Flat-headed Cat and the Iriomote Cat) offering extra grip in its high-speed pursuits. The ligament structure of the cheetah’s claws is the same as those of other cat-like dogs; it simply lacks the sheath of skin and fur present in other varieties, and therefore the claws are always visible, with the exception of the dewclaw. The dewclaw itself is much shorter and straighter than other close-cats. 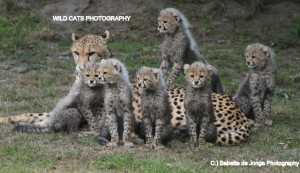 Adaptations that enable the cheetah to run as fast as it does include large nostrils that allow for increased oxygen intake, and an enlarged heart and lungs that work together to circulate oxygen efficiently. During a typical chase its respiratory rate increases from 60 to 150 breaths per minute. While running, in addition to having good traction due to its semi-retractable claws, the cheetah uses its tail as a rudder-like means of steering to allow it to make sharp turns, necessary to outflank prey who often make such turns to escape.

Unlike “true” big cats, the cheetah can purr as it inhales, but cannot roar. By contrast, the big cats can roar but cannot purr, except while exhaling. However, the cheetah is still considered by some to be the smallest of the big cats. While it is often mistaken for the leopard, the cheetah does have distinguishing features, such as the aforementioned long “tear-streak” lines that run from the corners of its eyes to its mouth. The body frame of the cheetah is also very different from that of the leopard, most notably so in its thinner and longer tail, and unlike the leopard, its spots are not arranged into rosettes. 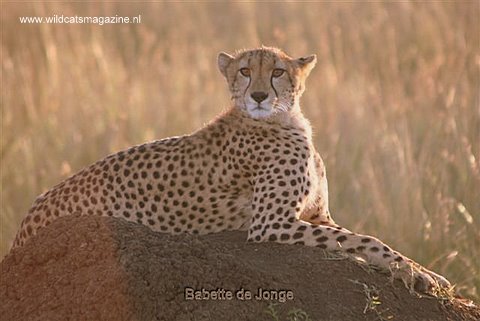 The cheetah is a vulnerable species. Out of all the big cats, it is the least able to adapt to new environments. It has always proved difficult to breed in captivity, although recently a few zoos have managed to succeed at this. Once widely hunted for its fur, the cheetah now suffers more from the loss of both habitat and prey.

The cheetah was formerly considered to be particularly primitive among the cats and to have evolved approximately 18 million years ago. New research, however, suggests that the last common ancestor of all 40 existing species of felines lived more recently than that – about 11 million years ago. The same research indicates that the cheetah, while highly derived morphologically, is not of particularly ancient lineage, having separated from its closest living relatives (Puma concolor, the cougar, and Puma yaguarondi, the jaguarundi) around five million years ago.

Of the five subspecies of cheetah in the genus Acinonyx, four live in Africa and one in Southwestern Asia. A small population (estimated at about fifty) survive in Iran, where conservationists are taking steps to protect it. The cheetah extincted in India, but there have been several unconfirmed reports of Asiatic Cheetahs in Pakistan, with at least one dead animal being recovered recently. 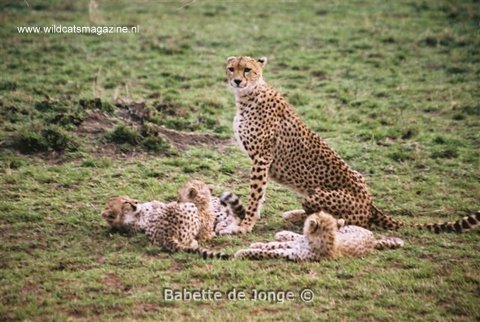 The cheetah thrives in areas with vast expanses of land where prey is abundant. The cheetah likes to live in an open biotope, such as semi-desert, prairie, and thick brush, though it can be found in a variety of habitats. In Namibia, for example, it lives in grasslands, savannahs, areas of dense vegetation, and mountainous terrain.

In much of its former range, the cheetah was tamed by aristocrats and used to hunt antelopes in much the same way as is still done with members of the greyhound group of dogs.

Females reach maturity in twenty to twenty-four months, and males around twelve months (although they do not usually mate until at least three years old), and mating occurs throughout the year. A study of cheetahs in the Serengeti showed that females are sexually promiscuous and often have cubs by many different males. 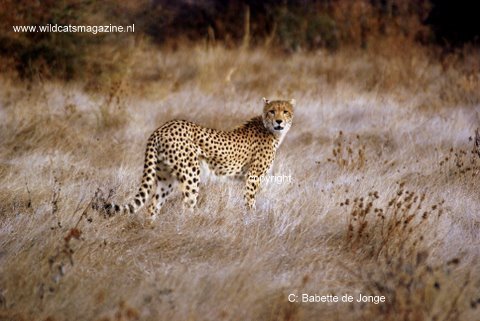 Females give birth to up to nine cubs after a gestation period of ninety to ninety-eight days, although the average litter size is three to five. Cubs weigh from 150 to 300 g (5.3 to 11 oz) at birth. Unlike some other cats, the cheetah is born with its characteristic spots. Cubs are also born with a downy underlying fur on their necks, called a mantle, extending to mid-back. This gives them a mane or Mohawk-type appearance; this fur is shed as the cheetah grows older. It has been speculated that this mane gives a cheetah cub the appearance of the Honey Badger (Ratel), to scare away potential aggressors. Cubs leave their mother between thirteen and twenty months after birth. Life span is up to twelve years in the wild, but up to twenty years in captivity.

Unlike males, females are solitary and tend to avoid each other, though some mother/daughter pairs have been known to be formed for small periods of time. The cheetah has a unique, well-structured social order. Females live alone except when they are raising cubs and they raise their cubs on their own. The first eighteen months of a cub’s life are important – cubs learn many lessons because survival depends on knowing how to hunt wild prey species and avoid other predators. At eighteen months, the mother leaves the cubs, who then form a sibling, or “sib” group, that will stay together for another six months. At about two years, the female siblings leave the group, and the young males remain together for life.

The Asiatic cheetah (Acinonyx jubatus venaticus), also known as the Iranian cheetah, is one the world’s rarest cat subspecies with somewhere between 70-110 individuals left. No surprisingly it is considered Critically Endangered by the IUCN… Red List.

Once found across the Middle East and Central Asia the subspecies is now restricted almost entirely to Iran; abundant populations that survived alongside tigers and elephants in India have vanished, and are likely gone from Afghanistan and Pakistan as well.

The world’s last population of Asiatic cheetahs remains hugely imperiled by prey decline due to decades of overhunting and ongoing poaching; habitat degradation due to overgrazing and drought; human-wildlife conflict with herders and livestock; and even cubs captured for the illegal pet trade.