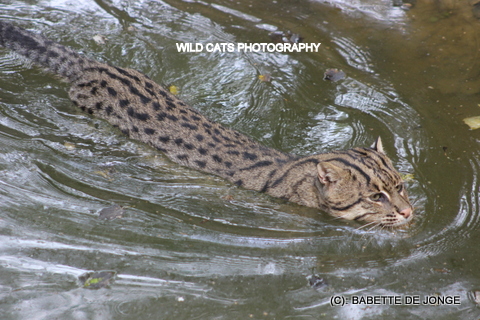 The Fishing Cat (Prionailurus viverrinus) is a medium-sized cat whose disjunct global range extends from eastern Pakistan through portions of India, Nepal and Sri Lanka, throughout Bangladesh and Mainland Southeast Asia to Sumatra and Java. The closest relative is the Flat-headed cat. 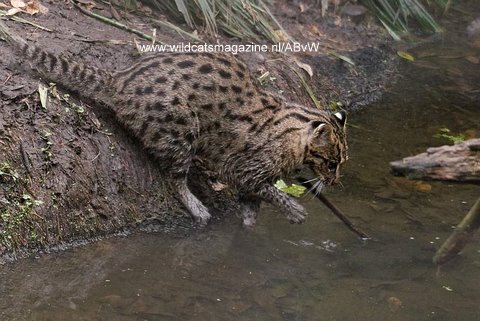 The Fishing Cat lives along rivers, streams and mangrove swamps. It is well adapted to this habitat, being an eager and skilled swimmer, like many other cats though people seem to think otherwise. 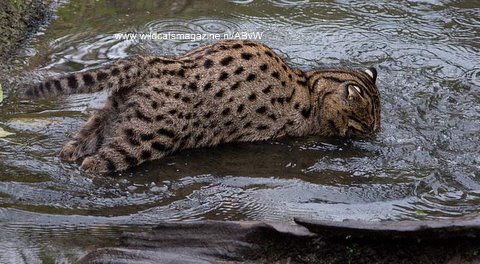 The fishing cat has an olive grey coloured fur with dark spots arranged stripe-like running along the length of the body. The face has a distinctly flat-nosed appearance, but not as flat as its closest relative, therefore called Flat-headed cat. 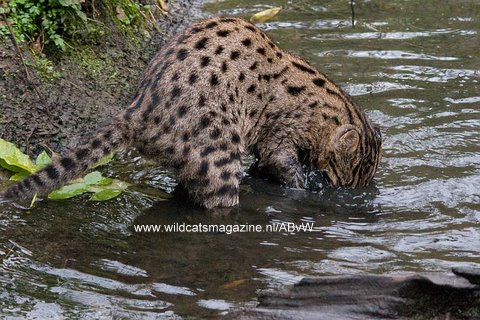 The size varies between locations. While Indian specimens grow to 80 cm (32 inch) plus 30 cm (12 inch) tail, Indonesian fishing cats only reach 65 cm (26 inch) plus 25 cm (10 inch) tail. Indian individuals weigh up to 11.7 kg (26 lbs), while in Indonesia adult fishing cats weigh in at up to approximately 6 kg (13 lbs). Male fishing cats look rather big though. They are stocky of build with medium short legs, and a short muscular tail of one half to one third of the length of the rest of the animal. 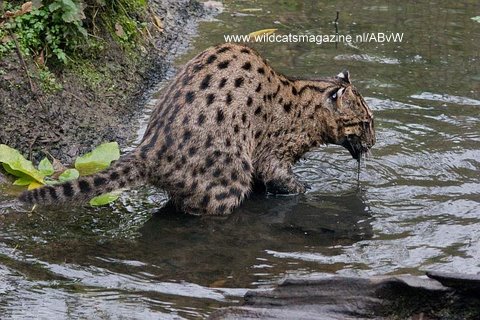 As the name implies, fish is the main prey of this cat, of which it hunts about 10 different species. It also hunts other aquatic animals such as frogs or crayfish, and terrestrial animals such as rodents and birds. The inter-digital webs on its paws help the cat gain better traction in muddy environments and water, like other mammals living in semi-aquatic environments. 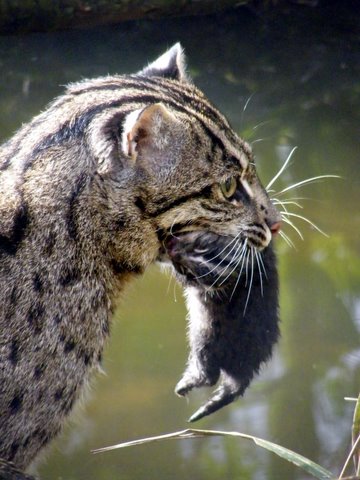 The Fishing Cat is endangered due to its dependence on wetlands, which are increasingly being settled and converted for agriculture, and also due to human over-exploitation of local fish stocks. It is believed extirpated in Afghanistan, it may already be gone from Malaysia and China, and it has become rare throughout its remaining distribution. 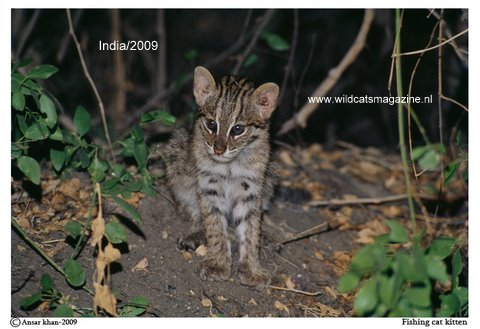