The Flat-headed cat is a small cat from forested areas, closely related to the Fishing cat and thanking his name to the flat-shaped head. The skull is fairly long, while the skull roof, as suggested by both its common and scientific name, is rather flat. It is considered endangered by IUCN due to habitat loss and pollution. 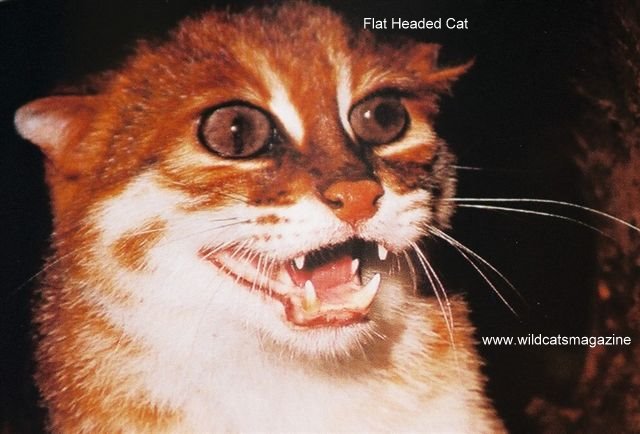 This species lives mainly near water in Thailand, Malaysia (both East and West), Brunei and Indonesia. The cat is hardly seen in the wild, so rarely is known about its situation there, but also very rare in captivity with only two individuals, both in Malaysian zoos, recorded by ISIS in early 2008. Like some other small cats it was originally placed in the genus Felis, but is now considered one of the five species in Prionailurus.

The thick fur of a Flat-headed cat is generally dark reddish-brown tinged grey, with a more reddish head and whitish underparts. Except for the relatively faint facial streaks it is rather unpatterned. It has relatively long premolars and this cat is one of the few cats that is unable to retract its claws (others being the Cheetah, fishing cat and the Iriomote cat) like dogs. The legs are fairly short and the ears are short and round. The inter-digital webs on its paws help the cat gain better traction in muddy environments and water, and are even more pronounced on this cat than those on the paws of the closely related Fishing Cat. Head-body length is 41-50 cm, short tail of 13-15 cm and the cat weights about 1.5-2.5 kg.

Like we said little is known about its wild behaviour, but captive individuals lived for 14+ years. Also a gestation period of about 56 days and a litter size of 1-2 kittens have been reported in captivity. Like most of the cats also the Flat-headed cat is considered to be a nocturnal animal, but observations of captives suggests it is crepuscular. Differences in the situations between wild and captivity are sometimes causing problems.

The Flat-headed Cat is considered endangered by IUCN and listed on appendix 1 by CITES. The total population is believed to be less than 10,000 adults, with no single sub-population containing more than 1,000 adults, while habitat loss and water pollution are serious threats. The sightings from oil palm plantations suggests it is less specialized than generally believed. The Flat-headed Cat is fully protected throughout its natural range, except in Brunei, where this species lacks legal protection. Sightings are very rare. 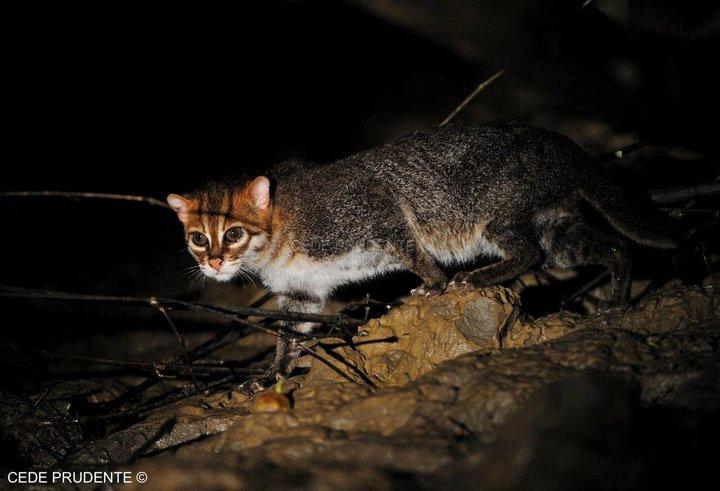