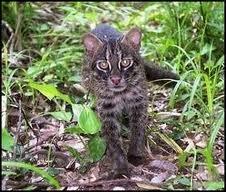 While technically a subspecies of Asia’s leopard cat, the Iriomote cat is peculiar in that it is only found on the Japanese island of the same name. At 109 square miles around, the island offers limited space for the solitary, brown- and gray-mottled cats. That presents conservationists with a frustrating problem. The Iriomote cat is currently listed as critically endangered since 2008, with less than 250 of these unique cats still in the wild; as of 2007, there are an estimated 100–109 individuals remaining.. Separated from other leopard cat populations by the sea, the challenge is to find a place for these rare felids to survive in the forested hills of their home.

The cats are predominantly found in the subtropical forests that cover the island, no higher than 200 meters above sea level, and prefer areas near rivers, forest edges, and places with low humidity.

Iriomote cats are nocturnal and especially active during the twilight hours,but during the mating season they will become active during the day as well During the daytime, they sleep in the hollows of trees or in caves. Their ranges run from 1-7 square kilometers, and they mark their territory within their range by urinating and defecating on rocks, tree stumps, and bushes.They are land mammals, but they do climb trees, go into the water, and will even swim.

The mating season lasts from December to March, and females will go into heat several times during this period, with the peak being in January and February. Towards the end of February, they will fast for about two weeks. It is during this period that females will be most sexually excited. Male and female cats will always be together at this time, and it is thought that conception happens during these two weeks. Pregnancy is viviparous, and between April and June pregnant female cats will give birth to 1–3 kittens in a tree hollow or cavern. The locations chosen for birthing and rearing are dry and have good ventilation. Kittens stay with their mother for about eleven months, and they will begin to become more independent during the fall and winter months. They will stay in their mother’s range from anywhere between a few months and years. Kittens reach maturity twenty months after birth.

Iriomote cats are carnivorous and prey on various mammals, birds, reptiles, amphibians, fish and crustaceans. They typically ingest 400–600 grams of food a day. Other types of wild cats will primarily hunt small mammals such as rodents and rabbits, but because there are no other carnivores to compete with the Iriomote cat on the island, there is no need for them to isolate themselves from the various habitats and food sources that are available. Thus, their diet is quite varied.

Iriomote cats are solitary and very territorial and will not allow others into their area.That said, males’ and females’ ranges do overlap, and one to two females tend to live within a single male’s sphere. Typically, cats of the same gender will not overlap their territories, but partial overlaps are seen.Oftentimes these small overlaps are hunting grounds. It is thought that the cats make rounds of their territories lasting three to four days, marking and hunting as they go.

It is estimated that Iriomote cats live for seven to eight years in the wild and eight to nine years in captivity. Because of human influences, though, traffic accidents and traps may lower their lifespan to two to five years. In captivity, an Iriomote cat lived for an estimated fifteen years and one month, the longest known lifespan of any Iriomote cat.

There have been a handful of Iriomote cats kept in captivity. A five week old male kitten that had been separated from its mother was found on June 14, 1979. He was named Keita and was kept at the Okinawa Zoo until he died of old age at approximately thirteen years and two months of age. A female specimen was also kept at the National Museum of Nature and Science. She was believed to have been approximately nine years and seven months old when she died. On August 6, 1996, a male kitten that would later be known as Yon was taken into care at the Iriomote Wildlife Protection Center after being involved in a traffic accident.

On December 20, 2010 Yon was found to be curled up and unmoving near a dried stream. He was brought into the center’s rehabilitation room, where it was discovered that he had pulmonary edema which had nearly killed him, however he was able to eat by the next day and gradually got better. He was unable to walk for the remainder of December, though by the end of January he regained his ability to walk, and during February and March he improved enough to be able to walk up and down stairs. However his condition then took a turn for the worse, and he died on the night of April 9 at an estimated fifteen years and one month old. He weighed 3.5 kilograms and was 78.5 centimeters long. He is the oldest Iriomote cat on record.

The Iriomote cat (Prionailurus bengalensis iriomotensis) is a subspecies of the leopard cat that lives exclusively on the Japanese island of Iriomote. It is critically endangered. 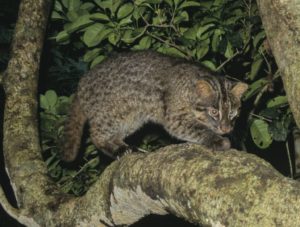 We received an e-mail and an excellent drawing by Masahiro Tateishi.
She is a Japanese wildcat enthusiast. She asked us to put this cat species in the spotlight again. The Iriomote Wildlife Conservation Center reported only 110 Iriomote cats in 2016 and ever since it only went downhill for the numbers of this species. It is very rare to have a good sighting of this cat. Luckily we can show you this great drawing and some pictures of the Conservation Center. To follow their great conservation work for the Iriomote cat, go to their website. 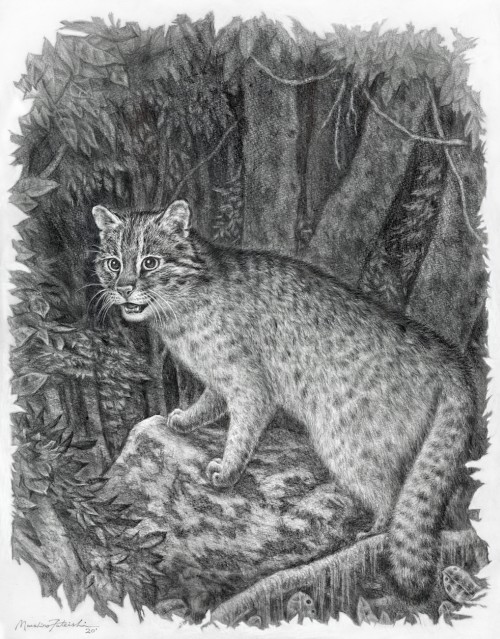