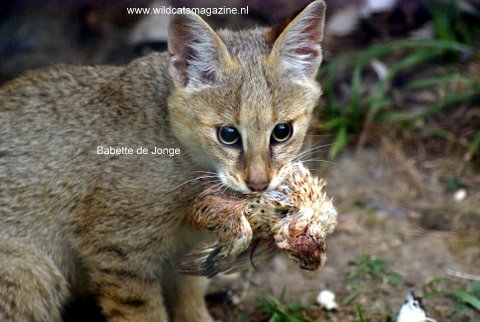 The jungle cat (“swamp lynx”), is a medium-small cat and today considered the largest remaining species of the wild cat genus Felis. Jungle cats are the most common small cats in India and are also found in Egypt, West and Central Asia, South Asia, Sri Lanka and Southeast Asia. In some areas jungle cats come close to villages and people and may even live in deserted houses. They inhabit savannas, tropical dry forests and reedbeds along rivers and lakes. They are not found in rainforests. They live in altitudes up to 2,500 metres (8,200 ft), but are more common in the lowlands. 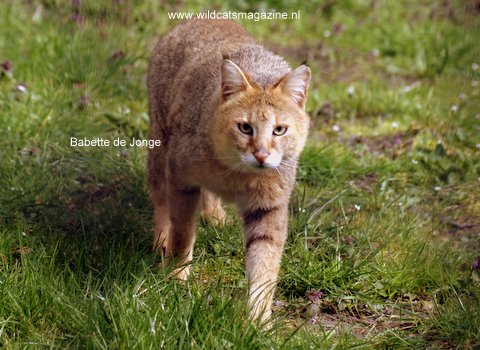 The most distinctive feature of a jungle cat are equal-sized claws on both fore and hind legs (unlike those of common domestic cats, for example, where hind claws are normally longer and stronger than fore), which allow it to climb down trees as easily as up, with its head facing downward. Dependent on the subspecies the colour of the fur is yellowish-grey to reddish-brown. While vertical bars are visible on the fur of kittens, these bars disappear in adult cats. Due to the pointed ars and the long legs this cat resembles a small lynx (hence the name “swamp lynx”).

Jungle cats are solitary in nature. Their habitat consists of other animals’ abandoned burrows, tree holes, and humid coves under swamp rocks. Their natural enemies are a.o. crocodiles, bears, wolves and other larger felines such as tigers. When countered by a threat, the jungle cat will vocalize before engaging in attack, producing small roars, a behavior uncommon for domestic cats. In some cases, they jump on their attacker, but will usually retreat upon encountering larger threats. There have been known cases of jungle cats attacking curious humans near their habitat, but, their attack seems to pose no medical significance besides wound infection from clawing. 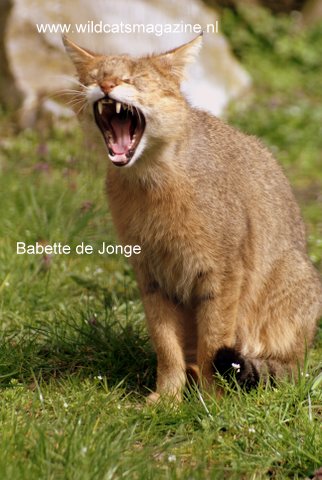 Jungle cats are diurnal and mostly hunt for rodents, frogs and birds. They can sometimes hunt for fish while diving, but mostly swim in order to lose track of their scent (as opposed to domestic cats, who use grooming to effect this).

During mating season, the male “barks”, sounding like a large dog. Females are sexually mature at the age of 11 months and can give birth to two litters in a year, of 1-6 kittens. Gestation lasts 64-66 days and is remarkably short for an animal of this size. Kittens weigh 150-160 g at birth and open their eyes at 11-13 days of age. Males usually do not participate in the raising of kittens, but in captivity have been observed to be very protective of their offspring, more than the females, or males of other cat species.

The Jungle Cat’s median life expectancy in captivity is ten to twelve years. In the wild, however, some Jungle Cats have been known to live for as long as twenty years 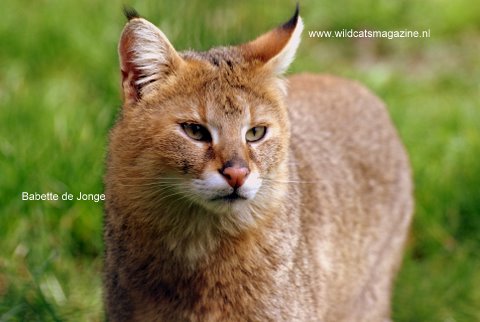 This species is often assessed as being in no danger and has therefore been ignored as a rare species. In fact, in recent years a clearer picture has showed that this species could well be among the rarest of the small cats in Asia, and definitely the rarest one for which there is no protection within most of its current distribution. The jungle cat is assumed to be rare in its marginally African range. It is also assumed to be rather rare throughout the Middle East, where it is heavily hunted and poisoned and it is likely that this species is scarce in most parts of the Middle East. 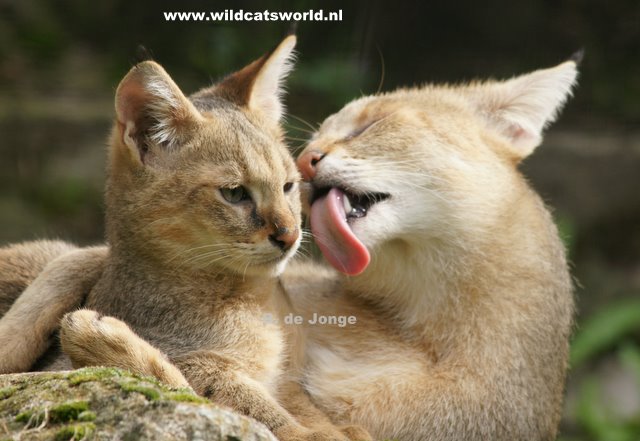 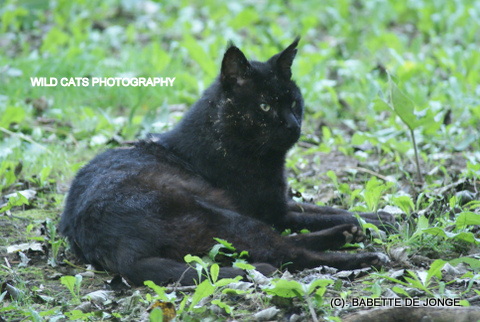 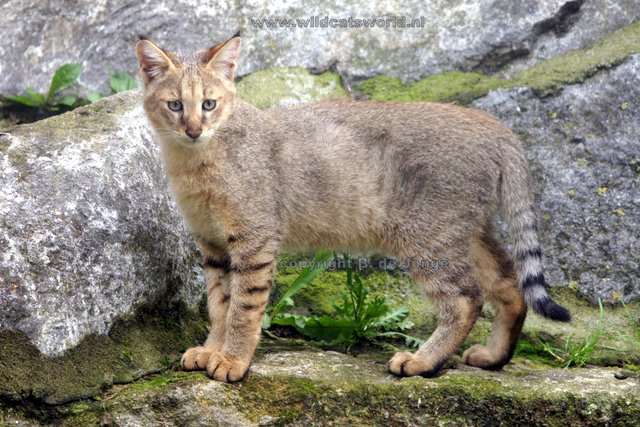 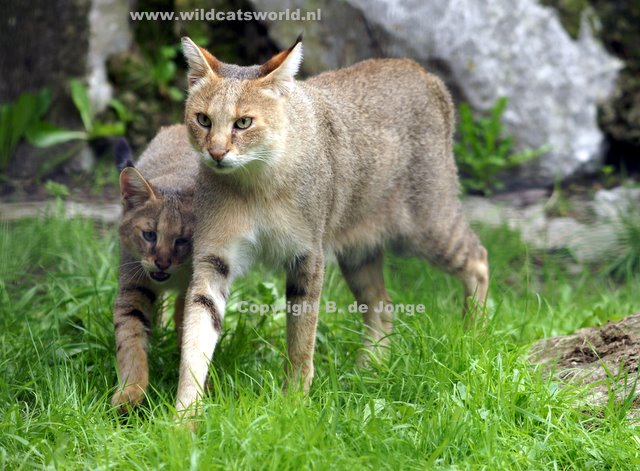 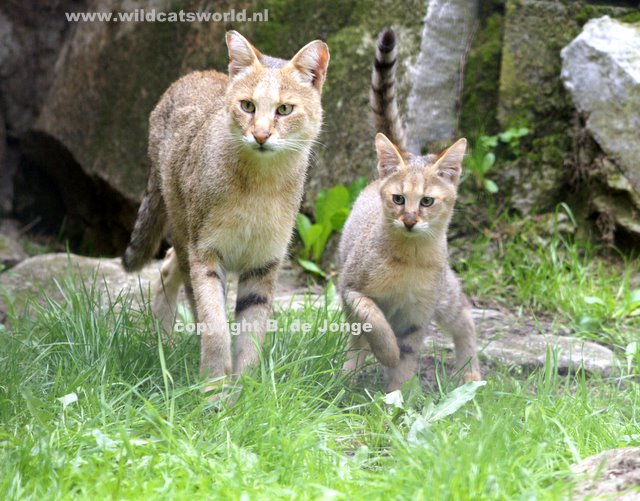 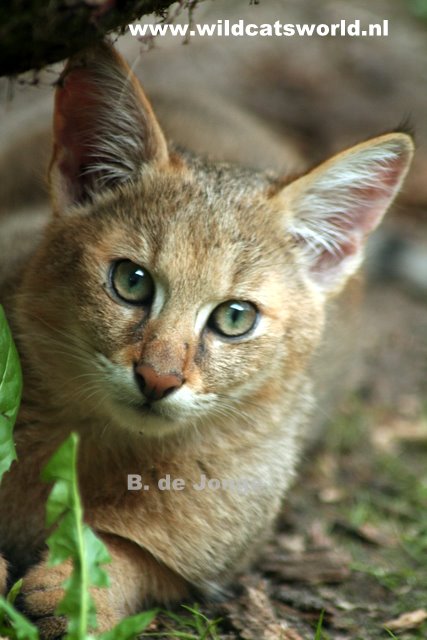