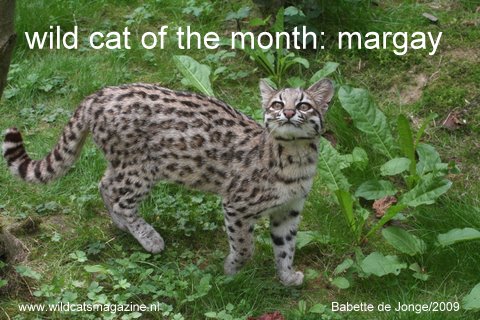 The Margay is a spotted cat native to Central and South America. It roams the rainforests from Mexico to Argentina. The margay is similar in appearance to the Ocelot, though itïs body is smaller, growing up two 25-27 inches and in comparison with the Ocelot, the margay displays longer legs and tail. 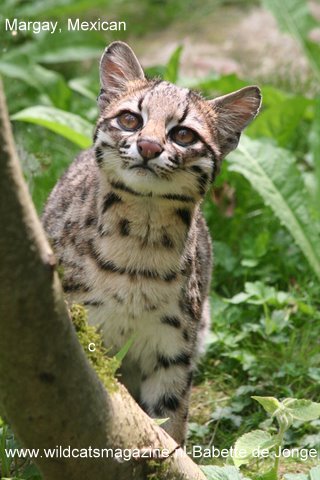 Most notably the Margay is a much more skillful climber than its relative, and it is sometimes called the Tree Ocelot because of this skill. Whereas the Ocelot mostly pursues prey on the ground, the Margay may spend most of its time in the trees, leaping after and chasing birds and monkeys through the treetops. The margay climbs head-first down trees. Its ankles can turn up to 180 degrees, it can grasp branches equally well with its fore and hind paws, and it is able to jump considerable distances. The Margay has been observed to hang from branches with only one foot.The Margay can jump vertically 18 feet and jump horizontally 23 feet. 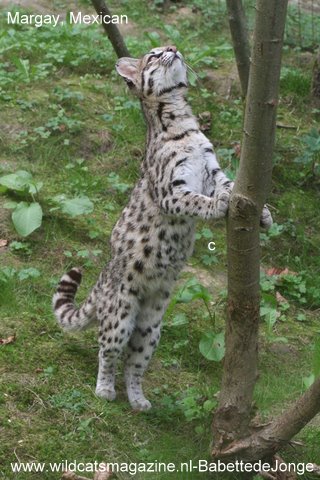 The range of the margay extends from Mexico down through Peru, parts of Paraguay to the northern areas of Argentina. The cats markings are similar to that of the ocelot and its smaller relative the tiger cat or oncilla – having dark ringed rosette markings on a tawny to yellow/buff background. However the rosettes are commonly less well defined than in the ocelot and appear more frequently as solid blotches along its back – regional differences in overall coat colour occur, with margays from mountain elevations having darker and thicker coats than there lowland forest neighbours. The margay lives exclusively in forested areas and is the most accomplished climber of all its fellow cats. Totally at home in the branches, it has specially adapted claws and ankle joints which can move through 180 degrees, enabling it to move with almost monkey like ease amongst the tree tops. Its agility is demonstrated by the apparent ease at which the cat can scamper down the trunks of trees head first and run upside down beneath branches. 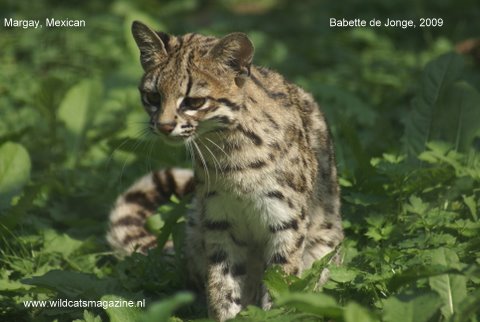 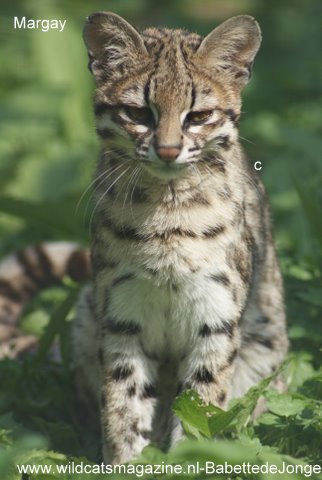