The ocelot is a wild cat, of the group small cats, distributed over South and Central America and Mexico. The ocelot’s appearance is similar to the domestic cat, though its fur resembles that of a Jaguar or a clouded leopard and was once regarded as particularly valuable. As a result, hundreds of thousands of ocelots have been killed for their fur. The feline was clasified a “vulnerable” endangered species from 1972 until 1996, but is now rated “least concern” by the 2008 IUCN Red List. The ocelot is mostly nocturnal and very territorial like all cats. It will fight fiercely, sometimes to the death, in territorial disputes. In addition, the ocelot marks its territory with urine. Like most felines, it is solitary, usually meeting only to mate. However, during the day it rests in trees or other dense foliage, and will occasionally share its spot with another ocelot of the same sex. When mating, the female will find a den in a cave in a rocky bluff, a hollow tree, or a dense (preferably thorny) thicket. The gestation period is estimated to be 70 days. Generally the female will have 2-3 kittens, born in the autumn with their eyes closed and a thin covering of hair. 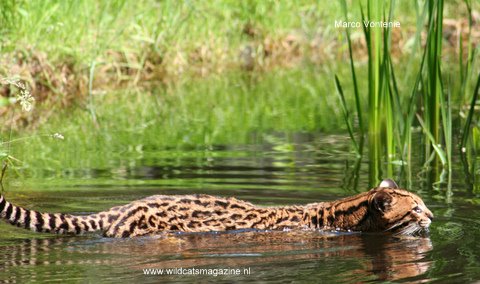 Like many wild cats, it is occasionally kept as a pet. The actors’ couple Michael Douglas and Catherine Zeta-Jones keep an ocelot as a pet. Also musician Gram Parsons kept an ocelot as a pet in the back yard swimming pool area of his family’s Winter Haven in Florida.

The ocelot is a great tree-climber. They hunt over a range of 18 km2, taking mostly small mammals, like deer, various rodents, reptiles and amphibians (lizards, turtles and frogs), crab, birds and fish. Almost all of the prey that the ocelot hunts is far smaller than itself. Studies suggest that it follows and finds prey via odor trails, but the ocelot also has very good vision, including night vision. The white rings around the ocelot’s eyes help to reflect extra light into the eye at night. They climb out of a tree head down first. Ocelots are also very fond of water and don’t mind swimming. 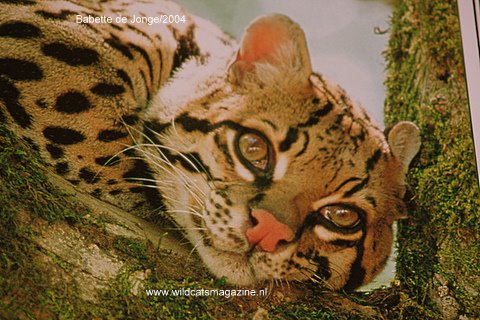 The ocelot once inhabited the chaparral thickets of the Gulf Coast of south and eastern Texas, and was found in Arizona. In the United States, it now ranges only in several small areas of dense thicket in South Texas. The ocelot’s continued presence in the U.S. is questionable, as a result largely of the introduction of dogs, being shot by ranchers, the loss of habitat, and the introduction of highways. Young male eyocelots are frequently killed by cars during their search for a territory. 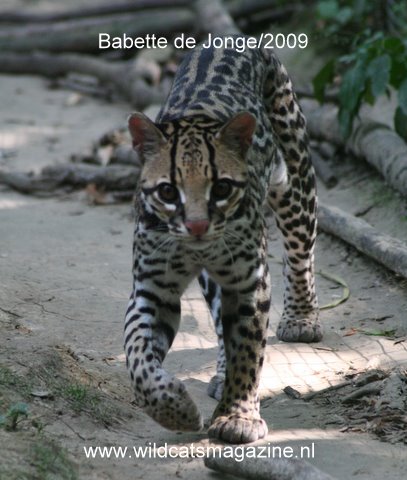 The musical band Phish has a song titled “Ocelot” dedicated to this wonderful cat, with lyrics describing perceived ocelot behavior.