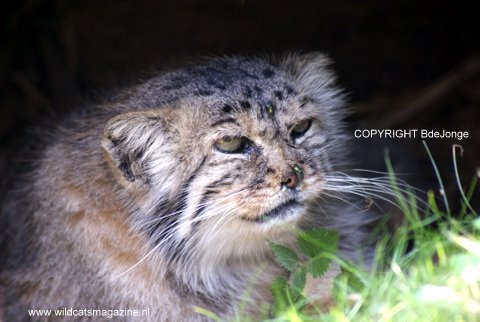 The Pallas cat, named after German naturalist Peter Simon Pallas (1741-1811) is a small-sized wild cat, also known as the Manul. 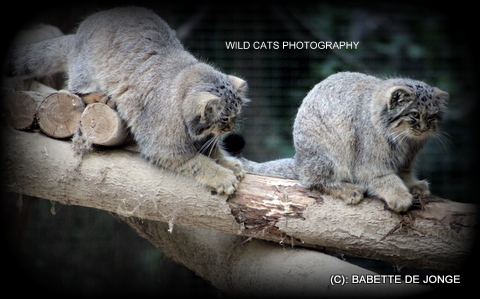 It is adapted to cold arid environments and lives in rocky terrain and grasslands through out central Asia. It’s known for its flattened face, stocky build, and long hair. 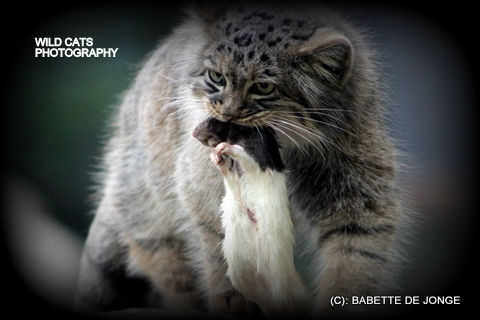 The cats’ coat is unique with black spots on the head and varying black stripes either on the back, tail, or both. The hair’s tip is white, producing a mystical, frosty appearance. Weight ranges from 2-4.5 kg in the adult cat. The Pallas’ cat is adapted to cold arid environments and lives in rocky terrain and grasslands through out central Asia. They inhabit the Asian steppes up to heights of 4000m (13,000 ft). The Pallas’ cat is the oldest living species of a clade of felins that includes the modern genus Felis. 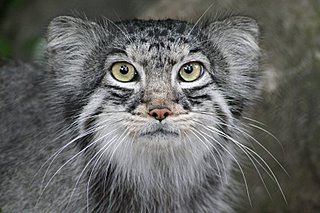 Several physical features distinguish the Pallas’ cat from other felines. These small cats have a stocky body with thick soft fur and an abundant dark, woolly underfur which is double the length of that on the rest of the body. The colour varies from a light grey to a yellowish buff and russet, with the white tips of the hair producing a frosted appearance. There are some faint stripes along the sides of the body (more visible on the summer coat), and the fur on the underside is darker and longer than that above. Their head is round and broad with scattered black spots on the forehead, and two distinct parallel black bars on each cheek. The large, owl-like eyes are yellow, and the pupils contract into small circles instead of the usual vertical slits. The ears are short, rounded, and set low on the sides of the head. They are buff on the backs. The legs are short and stout, and the tail is thickly furred with a broad terminal black band, and five to six narrow rings along it. Because of its relatively flat face, the Pallas’ cat was once thought to be the ancestor of the Persian cat, which isn’t true. Further on this cat resembles a gremlin (from the motionpicture “The Gremlins”). Maybe the makers of this succesful film got inspired by the Pallas’ cat; who can tell? 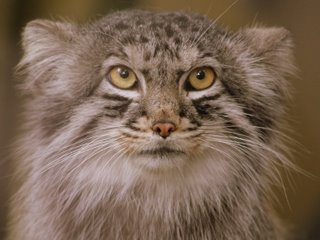 The range of the palas cat extends from Iran through southern Asia to parts of western China. Its habitat varies from rocky desert through steppes to barren mountainous regions up to about 15,000 feet and the extremes in temperature in all these areas is combated by the palas cats dense fur. During the day the cat uses caves, burrows and rock fissures to sleep and becomes more active toward dusk. The palas cat is a lone, nocturnal hunter and preys predominately on rodents and small mammals. Like most of the cats’ species, Pallas’ cat has been hunted for its fur. Before it became a legally protected species, tens of thousands of skins were harvested yearly from countries in the habitat range, including China, Mongolia, Afghanistan and Russia. Today, the cat is regarded as beneficial to its environment as the cat feeds on agricultural pests. However, poisoning of pest rodents and pikas may also affect the cat’s survival.

Pika form the major part of their diet, with small rodents, birds and insects also part of their diet. They not only catch their prey by chasing, but also by waiting outside of dens and ambushing the prey. If the holes are shallow, they have also been seen “fishing” for prey with their paws. 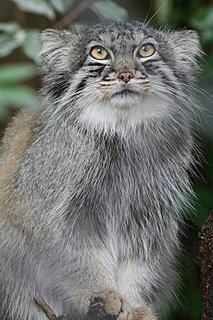 Pallas’ cats are regulated by CITES as Appendix II species. They are not covered by the U.S. Endangered Species Act but are protected by national legislation over most of their range. IUCN considers them Insufficiently Known. Described as being most abundant on the cold grasslands of Mongolia, Inner Mongolia and the Tibetan Plateau, it occurs widely but is nowhere common. Elsewhere the species is considered vulnerable to rare and uncommon, including in Afghanistan, Ladakh, northern India and Pakistan, and especially the small, isolated population in Baluchistan. 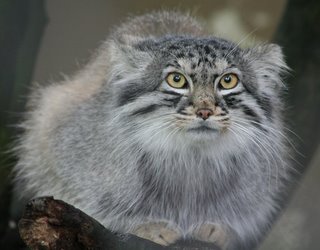 Very little is known about the reproductive habits of these solitary felines. What is known comes from studies of Otocolobus manul in the former Soviet Union.

Litters generally range from 3 to 6 kittens in size, but some have been found to have as many as eight. Like many other felines, the kittens are blind and helpless when borne. They are typically about 12cm long and weigh around 300g at birth. The kittens molt around the age of two months, and have been observed hunting by the age of three to four months. Successful captive-breeding of Pallas’s Cat is difficult. Although it breeds well, survival rates are low owing to infection. This has been attributed to an under-developed immune system, as its natural habitat is isolated and it wouldn’t normally be exposed to infection. Life span is 12 years. 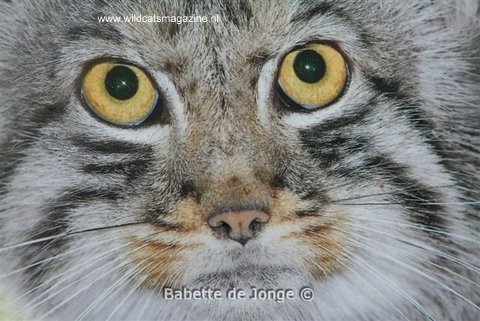 There is huge variation in coat color across the entire range of this species. This has caused some scientists to refer to them with three different subspecies classifications. There are three named subspecies, the nominate race, O. m. manul, from Mongolia, western China and Russia being the smallest and rarest. The race from Turkmenia, Afghanistan and northern Iran, O. m. ferugineus, is reddish in color. The race from northern Pakistan, northern India, Tibet, Khazakstan, Kirgizstan, Tadzhikistan, Uzbekistan and northern Nepal is referred to as O. m. nigripectus (if valid). 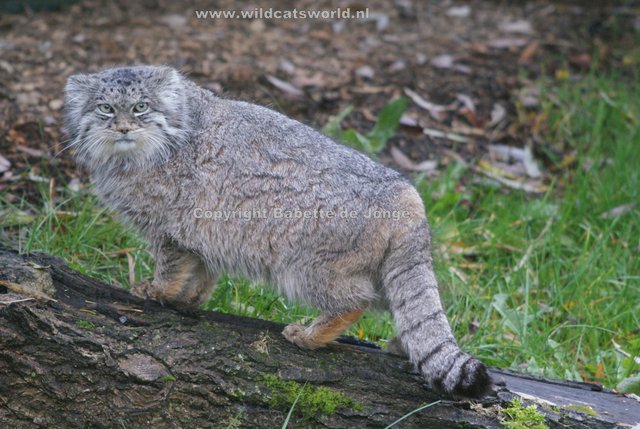 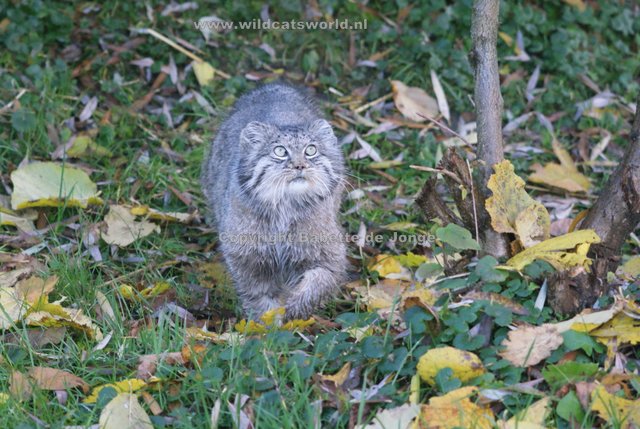 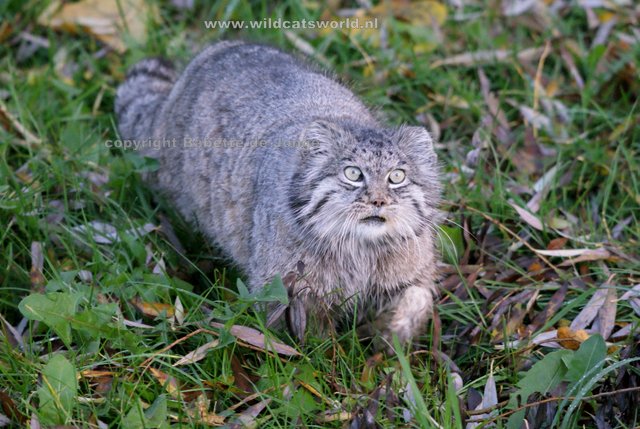 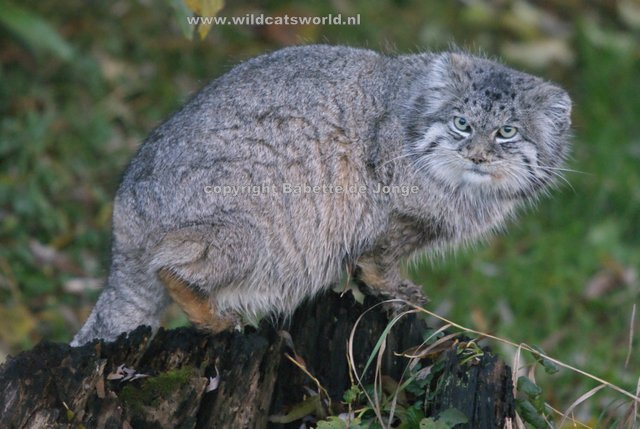