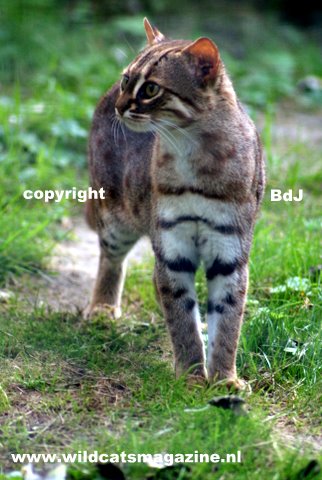 The Rusty-spotted Cat rivals (and may exceed) the South African Black footed cat (Felis nigripes) as the world’s smallest wild cat. The rusty-spotted cat is 35 to 48 centimetres (14 to 19 inch) in length, with a 15 to 30 centimetres (5.9 to 12 in) tail, and weighs only 0.9 to 1.6 kilograms (2.0 to 3.5 lb). Being one of the lesser studied South Asian carnivores it has been listed as vulnerable by IUCN only in 2002. It is hunted for food in some areas by local human populations.

Rusty-spotted cats have a relatively restricted distribution. They mainly occur in moist and dry deciduous forests as well as scrub and grassland in India and Sr Lanka, but are likely absent from evergreen forest. They prefer dense vegetation and rocky areas.

There are two subspecies: 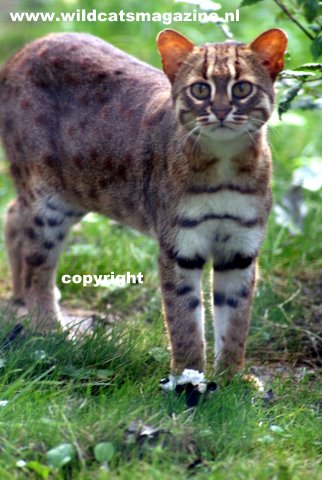 In India, they were long thought to be confined to the south, but recent records have established that they are found over the whole country. They were observed in the Fir Wildlife Sanctuary and National Park, in the Tadoba Andhari Tiger Reserve in Maharashtra, on India’s east coast, and in eastern Gujurat. In Sri Lanka, there are a few records from montane and lowland rainforest. There are two distinct populations, one in the dry zone and the other in the wet zone. 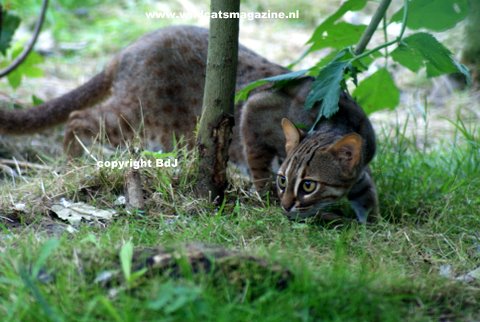 The rusty-spotted cat is nocturnal and partly arboreal, spending the day sleeping in dense cover or shelter such as hollow logs. It feeds mainly on rodents and birds, but may also take lizards, frogs, or insects. They hunt primarily on the ground, making rapid, darting movements to catch their prey; they apparently venture into the trees primarily to escape larger predators rather than for food. As with other cats, they mark their territory by spraying urine. 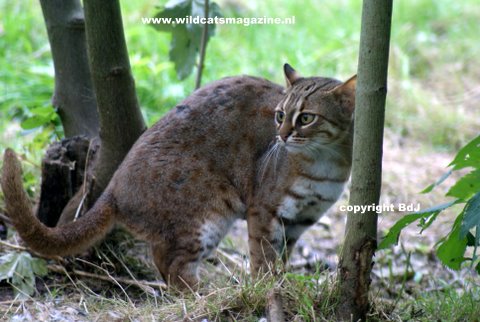 Oestrus lasts five days, and mating is unusually brief. Since the cat is likely to be vulnerable during this period, its brevity may be an adaptation to help it avoid larger predators. The mother prepares a den in a secluded location, and gives birth to one or two kittens after a 65-70 day gestation. At birth, the kittens weigh just 60 to 77 grams (2.1 to 2.7 oz), and are marked with rows of black spots. The cat reaches sexual maturity at around 68 weeks, by which time it has developed the distinctive adult coat pattern of rusty blotches. Rusty- spotted cats have lived for twelve years in captivity, but their lifespan in the wild is unknown. 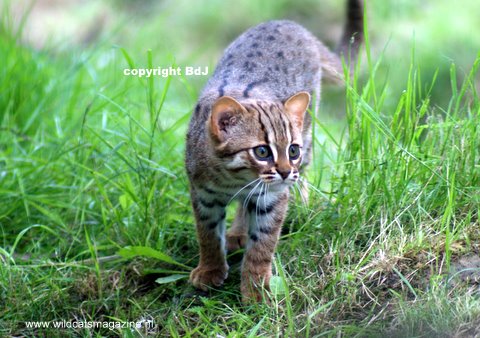 The rusty-spotted cat is easily domesticated and has been described as expressive, playful, and affectionate.

The rusty-spotted cat faces a high risk of extinction in the wild and is listed as vulnerable on the IUCN Red list. The CITES lists the Indian population in the Appendix 1 as threatened with extinction, where trade in the species is only allowed in exceptional circumstances. The Sri Lanka population is listed in the Appendix II as not necessarily threatened with extinction, where fur trade is strictly controlled. 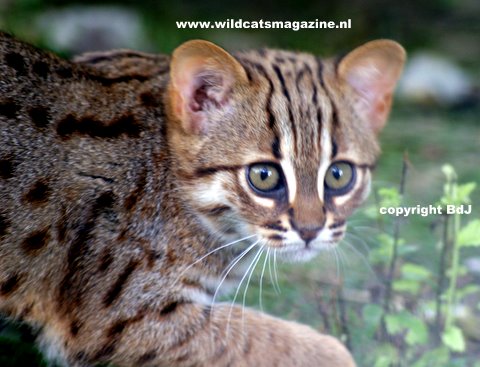