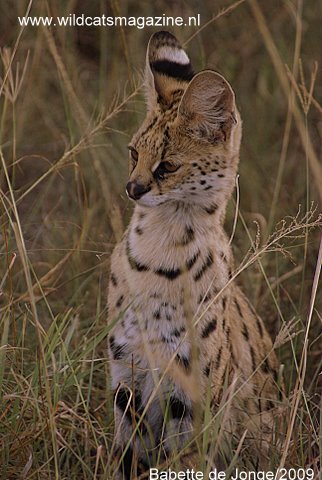 The Serval is a medium-sized African wild cat. It is closely related to the African Golden Cat and the Caracal.

It is a slender animal, with long legs and a fairly short tail. The head is small in relation to the body, and the tall, oval ears are set close together. The pattern of the fur is variable. Usually, the Serval is boldly spotted black on tawny. The “servaline” form has much smaller, freckled spots. In addition, melanism is known to exist in this species, giving a similar appearance to the black panther. White servals are white with silvery grey spots and have only occurred in captivity. 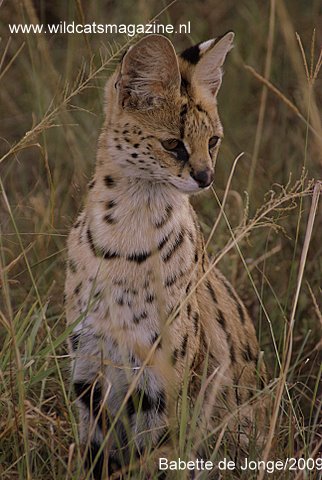 Its main habitat is the savanna, although melanistic individuals are more usually found in mountainous areas. The Serval needs watercourses within its territory, so it does not live in semi-deserts or dry steppes. It is able to climb and swim, but seldom does so. It has now dwindled in numbers due to human population taking over its habitat and also hunting its pelt. It is protected in most countries. The Serval is listed in Cites Appendix 2, indicating that it is “not necessarily now threatened with extinction but that may become so unless trade is closely controlled.” 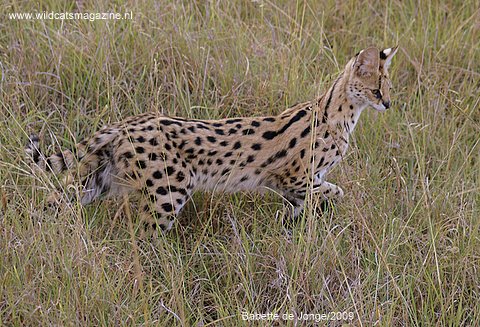 Although the Serval is highly specialised for catching rodents, it is an opportunistic predator whose diet also includes hares, hyraxes, birds, reptiles, insects, fish, and frogs. The Serval has been observed taking larger animals, such as small Springbok, but over 90% of the Serval’s prey weighs less than 200g. The Serval eats very quickly, and if its food is big enough, it sometimes eats too quickly, causing it to regurgitate the food because of clogging in the throat. 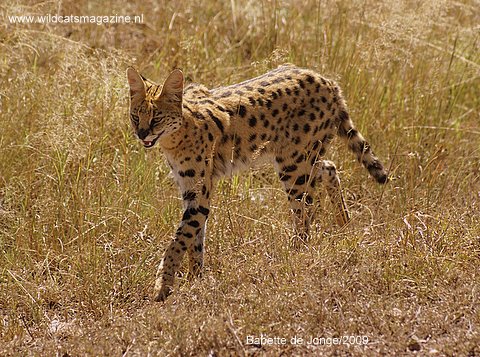 As part of its adaptations for hunting in the savannas, the Serval boasts long legs (the longest of all cats, relative to body size) and large ears. The long legs and neck allow the Serval to see over tall grasses, while its ears are used to detect prey, even those burrowing underground. While hunting, the Serval will pause for up to 15 minutes at a time to listen with eyes closed. The Serval’s pounce is a distinctive vertical ‘hop’, which may be an adaptation for catching flushed birds. The Serval is a highly efficient hunter, catching prey on as many as 50% of attempts, compared to around one of ten for most species of cat. The Serval has been known to dig into burrows in search of underground prey. 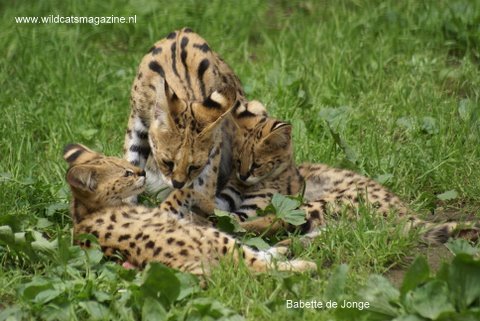 The gestation period for a female Serval is 66-77 days – 2 to 2 1/2 months. The litter consists of two or three kittens, sometimes as few as one or as many as five. They are raised in sheltered locations such as abandoned aardvark burrows. If such an ideal location is not available, a place behind a shrub may be sufficient. The Serval is sometimes preyed upon by the leopard and other large cats. More dangerous for this cat are humans. The Serval was extensively hunted for its fur. It is still common in West and East Africa, but it is extinct in the South African Cape Province and very rare north of the Sahara.

Melanistic (black) servals are relatively common in the Aberdare mountains of Kenya. Most Aberdare servals are black and this may be an adaptation to help retain body heat in the cold mountainous area. Black servals have been reported on the moorlands of the Aberdare Mountains at 9800 ft (3000 metres) and they have also been reported from Mount Kenya, the Mau Forest, the Cheringani Hills and Kilimanjaro.Servals found in the Kruger Park are tawny in colour, with black spots and stripes. 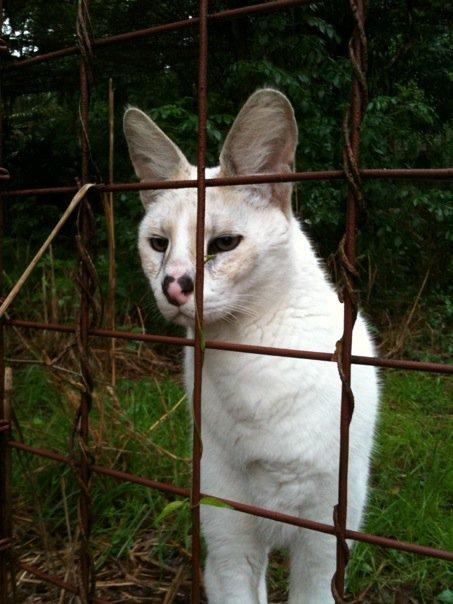