The snow leopard (Uncia uncia) is a moderately large cat native to the mountain ranges of South Asia and Central Asia. 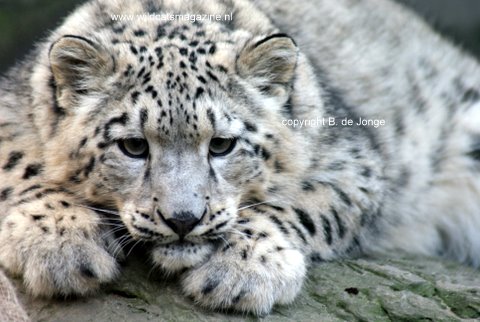 Snow leopards live between 3,000 and 5,500 metres (9,800 and 18,000 ft) above sea level in the rocky mountain ranges of Central Asia. Their secretive nature means that their exact numbers are unknown, but it has been estimated that between 3,500 and 5,000 snow leopards exist in the wild and between 600 and 700 in zoos worldwide. Despite the name “leopard” the closest relative is the tiger (Panthera tigris). The classification of this species has been subject to change. Its exact position remains unclear, and many sources still treat it as Uncia pending further studies. 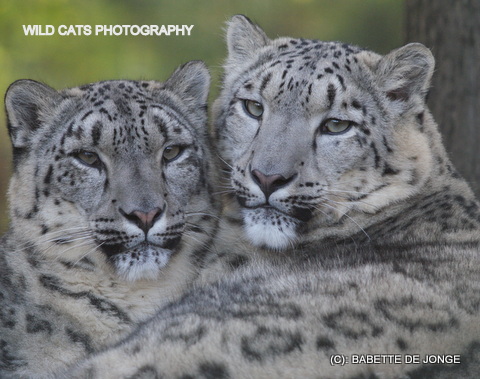 Snow leopards are smaller than the other big cats but, like them, exhibit a range of sizes, generally weighing between 27 and 54 kilograms (60 and 120 lb). Body length ranges from 75 to 130 centimetres (30 to 50 in), with the tail adding an additional 75 to 90 percent of that length.Snow leopards have long thick fur, whose base colour varies from smoky grey to yellowish tan, with whitish underparts. They have dark grey to black open rosettes on their body with small spots of the same color on their heads and larger spots on their legs and tail. Unusually among cats, their eyes are pale green or grey in colour. 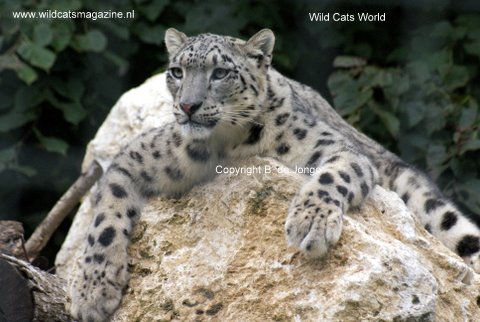 Snow leopards show several adaptations for living in a cold mountainous environment. Their bodies are stocky, their fur is thick, and their ears are small and rounded, all of which help to minimize heat loss. Their paws are wide, which distributes their weight better for walking on snow, and have fur on their undersides to increase their grip on steep and unstable surfaces; it also helps to minimize heat loss. Snow leopards’ tails are long and flexible, helping them to maintain their balance which is very important in the rocky terrain they inhabit; the tails are also very thick due to storage of fats, and are very thickly covered with fur which allows them to be used like a blanket to protect their faces when asleep.The snow leopard has a short muzzle and domed forehead, containing unusual large nasal cavities that help the animal breathe the thin cold air of their mountainous environment.

Snow leopards cannot roar like the other big cats, but their vocalizations include hisses, chuffing, mews, growls, and wailing. 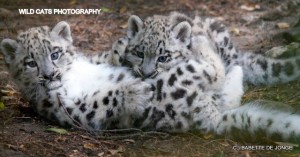 Snow leopards, like all cats, are opportunistic hunters and feeders, eating whatever meat they can find including carrion and domestic livestock. They can kill animals three times their size but will readily take much smaller prey such as hares and birds. While unusual among cats, snow leopards, like tigers, also eat a significant amount of vegetation, including grass and twigs.The diet of the snow leopard varies across its range and with the time of year, and depends on prey availability. In the Himalayas it preys mostly on bharals (Himalayan blue sheep) but its main prey consists of Siberian ibex and argali, a type of wild sheep, although this has become rarer in some parts of the snow leopard’s range. Other large animals eaten include various types of wild goats and sheep. Smaller prey consists of marmots, woolly hares, pikas, various rodents, and birds such as the snow cock and chukar. 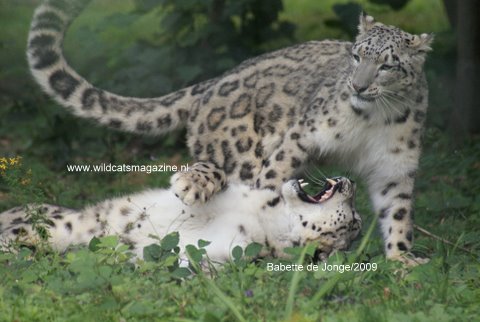 It is not averse to taking domestic livestock, which brings it into direct conflict with humans. Herders will kill snow leopards to prevent them from taking their animals. Snow leopards have not been reported to attack humans, and appear to be among the least aggressive of all the big cats. As a result, they are easily driven away from livestock; they readily abandon their kills when threatened and may not even defend themselves when attacked.

Snow leopards prefer to ambush prey from above, using broken terrain to conceal their approach, and can leap as far as 14 meters (46 ft). They will actively pursue prey down steep mountainsides, using the momentum of their initial leap to chase animals for up to 300 metres (980 ft). They kill with a bite to the neck, and may drag the prey to a safe location before feeding. They consume all edible parts of the carcass, and can survive on a single bharal for two weeks before hunting again.

Snow leopards usually mate in late winter and have a gestation period of 90-100 days, so that the cubs are born between April and June. Oestrus typically lasts from five to eight days, and males tend not to seek out another partner after mating, probably because the short mating season does not allow sufficient time. Paired snow leopards mate in the usual felid posture, from twelve to thirty six times a day. 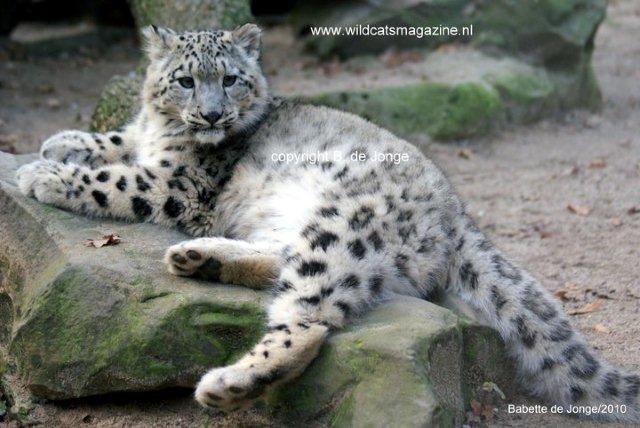 The mother gives birth in a rocky den lined with fur shed from her underside. Litter sizes vary from one to five cubs but two or three is more usual. The cubs are blind and helpless at birth, although already with a thick coat of fur, and weigh from 320 to 567 grams (11 to 20.0 oz). The eyes open at around seven days, and the cubs can walk at five weeks and are fully weaned by ten weeks. Also when they are born they have full black spots and turn into rosettes as they grow up.

The cubs leave the den at around two to four months of age, but remain with their mother until they become independent after around 18-22 months. Once independent, they may disperse over considerable distances, even crossing wide expanses of flat terrain to seek out new hunting grounds. This likely helps reduce the inbreeding that would otherwise be common in their relatively isolated environment. Snow leopards become sexually mature at two to three years, and normally live for 15-18 years, although in captivity they can live for up to 21 years.