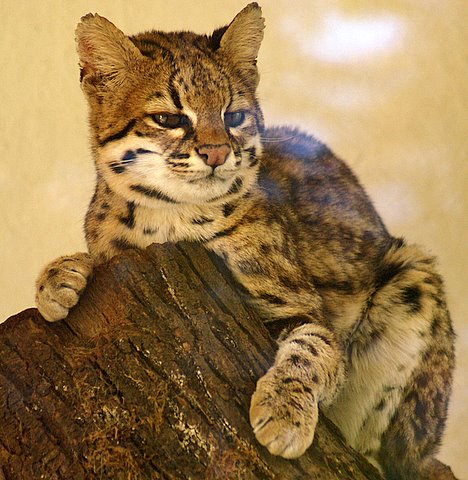 The Oncilla (Leopardus tigrinus) or Tiger Cat, is a small spotted felid found in the tropical rainforests of Central and South America. It is a close relative of the Ocelot and the Margay, and has a rich ochre coat, spotted with black rosettes.

The Oncilla resembles the Margay and the Ocelot, but is smaller, with a slender build and narrower muzzle. It grows to 38 to 59 centimetres (15 to 23 in) long, plus a 20 to 42 centimetres (7.9 to 17 in) tail. While this is somewhat longer than the average domestic cat, Leopardus tigrinus is generally lighter, weighing 1.5 to 3 kilograms (3.3 to 6.6 lb).

The fur is thick and soft, ranging from light brown to dark ochre, with numerous dark rosettes across the back and flanks. The underside is pale with dark spots and the tail is ringed. The backs of the ears are black with bold ocelli. The rosettes are black or brown, open in the center, and irregularly shaped. The legs have medium-sized spots tapering to smaller spots near the paws. This coloration helps the oncilla blend in with the mottled sunlight of the tropical forest understory. The Oncilla’s jaw is shortened, with fewer teeth, but with well-developed carnassials and canines. Some melanistic oncillas have been reported from the more heavily forested parts of its range. 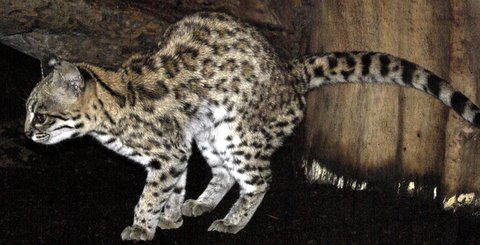 The Oncilla is a nocturnal animal,but in areas such as Caatinga, where their main food source consists of diurnal lizards, they are more likely to be active during the day. They also on hunt rodents, birds, small mammals, eggs, invertebrates, and the occasional tree frog. Occasionally, the cat will eat grasses. The Oncilla stalks its prey from a distance, and once in range, it pounces to catch and kill. Young oncillas have been observed to purr, while adults are known to make short, gurgling calls when close to one another.

The Oncilla is a primarily terrestrial animal, but is also an adept climber. This species shows a strong preference for montane forest, and are usually found in elevations higher than those of the margay or ocelot. They have been found in habitats as high as 4500m in Colombia, in the Andean highlands in Ecuador, and in the subtropical forest highlands in Brazil. They have also been identified in cerrado and scrubland environments. They are typically distributed from Costra Rica through Northern Argentina and have been recorded in northern Panama, but the remainder of the country appears to be a gap in the species’ range.
The following are the currently recognized subspecies: 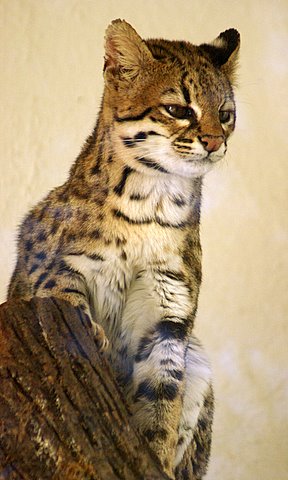 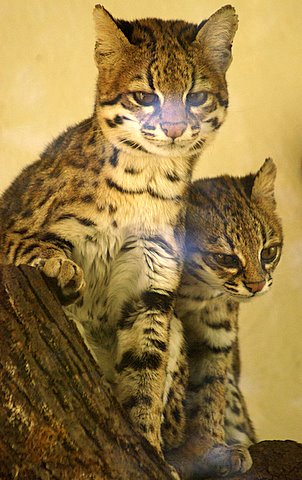 Oncillas reach sexual maturity at around two to two and a half years of age. Estrus lasts from 3 to 9 days, with older cats having shorter cycles.Oncillas produce 1 to 3 kittens (usually only one), after a gestation of 74 to 76 days.The kittens’ eyes open after eight to seventeen days, an unusually long period for a cat of this size. Unlike other cats, in which the incisor teeth tend to appear first, the teeth of an oncilla kitten erupt more or less simultaneously, at around 21 days of age. The kittens do not begin to take solid food until they are 38 to 56 days old (much older than in the domestic cat), but are fully weaned at three months. They have a life span of about 11 years in the wild, but there are records of these cats reaching an age of 17 years. There are a few oncillas in captivity in North America, and a few in zoos in Europe and South America. In captivity, the Oncilla tends to have high infant mortality rate. 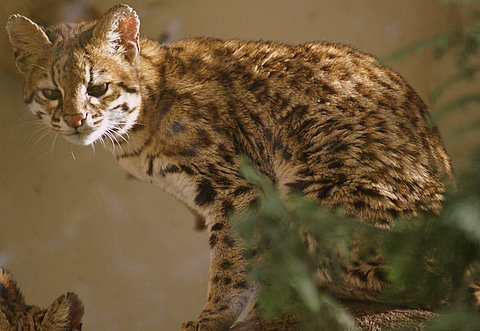 The International Union for the Conservation of Nature (IUCN) has classified the oncilla as vulnerable. The chief threats to these felines are deforestation and poaching. Oncillas are killed for their pelts, which are highly prized and often sold or made into clothing. Reports in 1972 and 1982 in South America showed that the Oncilla is one of the four most heavily hunted of all the small cats. Another factor contributing to Oncilla mortality is human expansion, settling what was once open terrain for wild cats. Coffee plantations are most often established in cloud forest habitats, causing the reduction of preferred habitats.