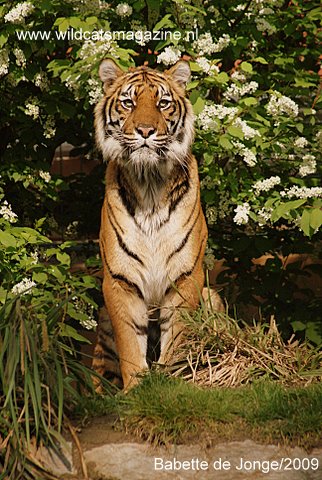 Tigers are perhaps the most recognisable of all the cats. They typically have rusty-reddish to brown-rusty coats, a whitish medial and ventral area, a white “fringe” that surrounds the face, and stripes that vary from brown or gray to pure black. The form and density of stripes differs between subspecies (as well as the ground coloration of the fur; for instance, Siberian tigers are usually paler than other tiger subspecies), but most tigers have over 100 stripes. The pattern of stripes is unique to each animal, and thus could potentially be used to identify individuals, much in the same way as are used to identify people. This is not, however, a preferred method of identification, due to the difficulty of recording the stripe pattern of a wild tiger. It seems likely that the function of stripes is camouflage, serving to help tigers conceal themselves amongst the dappled shadows and long grass of their environment as they stalk their prey. The stripe pattern is found on a tiger’s skin and if shaved, its distinctive camouflage pattern would be preserved. Like other big cats, tigers have a white spot on the backs of their ears.

The tiger (Panthera tigris) is a member of the Felidae family; the largest of the four Big Cats in the genus Panthera. Native to much of eastern and southern Asia, the tiger is an apex predator and an obligate carnivore. Reaching up to 4 metres (13 ft) in total length and weighing up to 300 kilograms (660 pounds), the larger tiger subspecies are comparable in size to the biggest extinct felids. Aside from their great bulk and power, their most recognizable feature is the pattern of dark vertical stripes that overlays near-white to reddish- orange fur, with lighter underparts. The largest subspecies of tiger is the Siberian tiger. Tigers do not live in Africa, though a lot of people seem to think so. 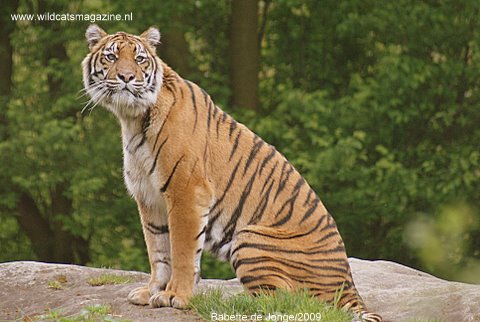 Highly adaptable, tigers range from the Siberian taiga, to open grasslands, to tropical mangrove swamps. They are territorial and generally solitary animals, often requiring large contiguous areas of habitat that support their prey demands. This, coupled with the fact that they are endemic to some of the more densely populated places on earth, has caused significant conflicts with humans. Of the nine subspecies of modern tiger, three are extinct and the remaining six are classified as endangered, some critically so. The primary direct causes are habitat destruction and fragmentation, and hunting. Their historical range, which once reached from Mesopotamia and the Caucasus through most of South and East Asia, has been radically reduced. While all surviving species are under formal protection, poaching, habitat destruction and inbreeding depression continue to be threats. 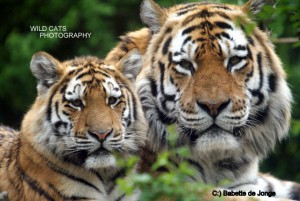 There are eight recent subspecies of tiger, two of which are extinct. Their historical range (severely diminished today) ran through Bangladesh, Siberia, Iran, Afghanistan, India, China and Southeast Asia, including some Indonesian islands. The surviving subspecies, in descending order of wild population, are:

There is a well-known mutation that produces the white tiger. This is an animal which is rare in the wild, but widely bred in zoos due to its popularity. Breeding of white tigers will often lead to inbreeding (as the trait is recessive). Many initiatives have taken place in white and orange tiger mating in an attempt to remedy the issue, often mixing subspecies in the process. Such inbreeding has led to white tigers having a greater likelihood of being born with physical defects, such as cleft palates and scoliosis (curvature of the spine). Furthermore, white tigers are prone to having crossed eyes (a condition known as strabismus). Even apparently healthy white tigers generally do not live as long as their orange counterparts.

Recordings of white tigers were first made in the early 19th century. They can only occur when both parents carry the rare gene found in white tigers; this gene has been calculated to occur in only one in every 10,000 births. The white tiger is not a separate sub-species, but only a colour variation; since the only white tigers that have been observed in the wild have been Bengal tigers (and all white tigers in captivity are at least part Bengal), it is commonly thought that the recessive gene that causes the white colouring is probably carried only by Bengal tigers, although the reasons for this are not known. Nor are they in any way more endangered than tigers are generally, this being a common misconception. Another misconception is that white tigers are albinos, despite the fact that pigment is evident in the white tiger’s stripes. They are distinct not only because of their white hue; they also have blue eyes and pink noses. Tigers are solitary and territorial animals, though they can get on with fellow tigers very well too. Not only in the zoo but also in the wild they can easily put up with other tigers. The size of a tiger’s home range mainly depends on prey abundance, and, in the case of male tigers, on access to females. A tigress may have a territory of 20 while the territories of males are much larger, covering 60-100 km2. The ranges of males tend to overlap those of several females. 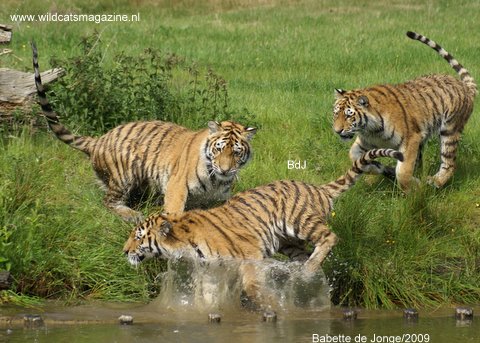 The relationships between individuals can be quite complex, and it appears that there is no set “rule” that tigers follow with regards to territorial rights and infringing territories. For instance, although for the most part tigers avoid each other, both male and female tigers have been documented sharing kills. For instance, George Schaller observed a male tiger share a kill with two females and four cubs. Females are often reluctant to let males near their cubs, but Schaller saw that these females made no effort to protect or keep their cubs from the male, suggesting that the male might have been the father of the cubs. In contrast to male lions, male tigers will allow the females and cubs to feed on the kill first. Furthermore, tigers seem to behave relatively amicably when sharing kills, in contrast to lions, which tend to squabble and fight. Unrelated tigers have also been observed feeding on prey together. The following quotation is from Stephen Mills’ book Tiger, as he describes an event witnessed by Valmik Thapar and Fateh Singh Rathore in Ranthambhore:

A dominant tigress they called Padmini killed a 250 kg (550-lb) male nilgai – a very large antelope. They found her at the kill just after dawn with her three 14-month-old cubs and they watched uninterrupted for the next ten hours. During this period the family was joined by two adult females and one adult male – all offspring from Padmini’s previous litters and by two unrelated tigers, one female the other unidentified. By three o’clock there were no fewer than nine tigers round the kill. This questions how solitary tigers really are; same like house cats, who also often share their home with lots of other cats.

When young female tigers first establish a territory, they tend to do so fairly close to their mother’s area. The overlap between the female and her mother’s territory tends to wane with increasing time. Males, however, wander further than their female counterparts, and set out at a younger age to eke out their own area. A young male will acquire territory either by seeking out a range devoid of other male tigers, or by living as a transient in another male’s territory, until he is old and strong enough to challenge the resident male. The highest mortality rate (30-35% per year) amongst adult tigers occurs for young male tigers who have just left their natal area, seeking out territories of their own.

Male tigers are generally more intolerant of other males within their territory than females are of other females. For the most part, however, territorial disputes are usually solved by displays of intimidation, rather than outright aggression. Several such incidents have been observed, in which the subordinate tiger yielded defeat by rolling onto its back, showing its belly in a submissive posture. Once dominance has been established, a male may actually tolerate a subordinate within his range, as long as they do not live in too close quarters. The most violent disputes tend to occur between two males when a female is in oestrus, and may result in the death of one of the males, although this is actually a relatively rare occurrence. 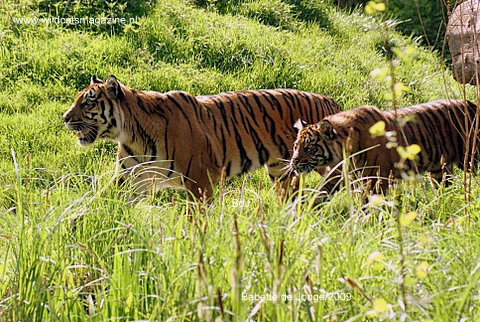 In the wild, tigers mostly feed on larger and medium sized animals. Sambar, gaur, domestic buffalo, chital, boar, and nilgai are the tiger’s favored prey in India. Sometimes, they also prey on leopards, pythons, sloth bears and crocodiles. In Siberia the main prey species are Mandchurian elk, wild boar, Sika Deer, Moose, roe deer, and musk deer. In Sumatra Sambar, Muntjac, wild boar, and Malayan tapir are preyed on. In the former Caspian tiger’s range, prey included Saiga Antelope, camels, Caucasian wisent, yak, and wild horses. Like many predators, they are opportunistic and will eat much smaller prey, such as monkeys, peafowls, hares, and fish.

Adult elephants are too large to serve as common prey, but conflicts between tigers and elephants do sometimes take place. A case where a tiger killed an adult Indian Rhinoceros has been observed. Young elephant and rhino calves are occasionally taken. Tigers also sometimes prey on domestic animals such as dogs, cows, horses, and donkeys. These individuals are termed cattle-lifters or cattle-killers in contrast to typical game-killers.

Although humans are not regular prey for tigers, they have killed more people than any other cat, particularly in areas where population growth, logging, and farming have put pressure on tiger habitats. Most man-eating tigers are old and missing teeth, acquiring a taste for humans because of their inability to capture preferred prey. Almost all tigers that are identified as man-eaters are quickly captured, shot, or poisoned. Unlike man-eating leopards, even established man-eating tigers will seldom enter human settlements, usually remaining at village outskirts. Nevertheless, attacks in human villages do occur. Man-eaters have been a particular problem in India and Bangladesh, especially in Kumaon, Garhwal and the Sundarbans mangrove swamps of Bengal, where some healthy tigers have been known to hunt humans. Because of rapid habitat loss due to climate change, tiger attacks have increased in the Sundarbans.

Advice: Never turn your back on a tiger!!

On this website, section “travel reports” you can also read about our visits to India to see the wild tigers. Also lots of photos on our photogalleries. 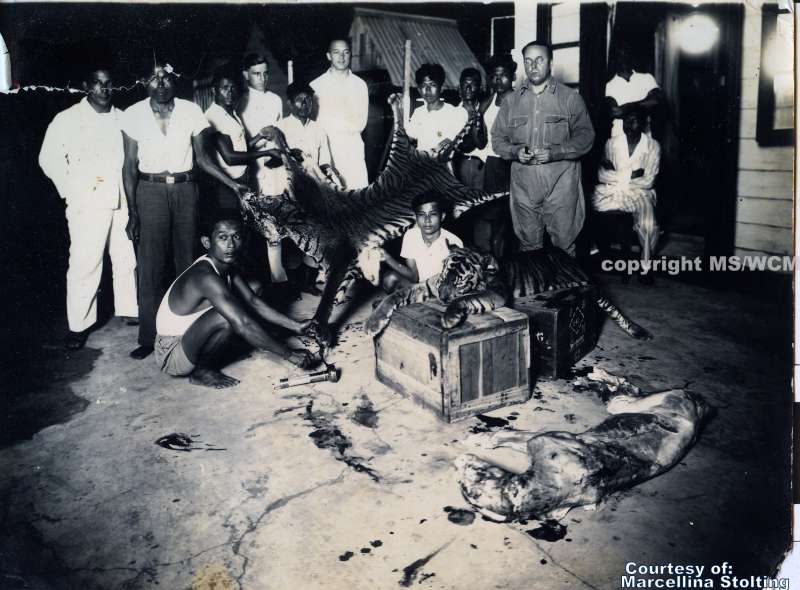