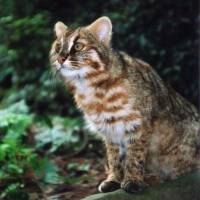 The number of Tsushima leopard cats, an endangered species found only on Tsushima Island in Nagasaki Prefecture, is shrinking, a survey by the Environment Ministry shows.

Only 70 to 100 of the animals are left on the island, according to the survey, which was released Wednesday.

Thirteen of the cats were killed in traffic accidents during fiscal 2012 alone, while a decline in their prey, including mice and birds as well as insects in the summer months, is accelerating the downtrend, the ministry said.

The ministry monitored the cat’s population between fiscal 2010 and 2012 through cameras and by analyzing DNA from their droppings.

In the previous survey from fiscal 2002 and 2004, the ministry estimated that around 80 to 100 Tsushima leopard cats were living on the island.

The ministry said it will explore the reasons behind the species’ decline in greater detail and draft measures to increase their numbers, for instance by returning to the wild those that are being bred in zoos in Nagasaki Prefecture and other parts of the nation.

The species was designated as a special natural monument by the government in 1971, and, two decades later, as a national endangered species.