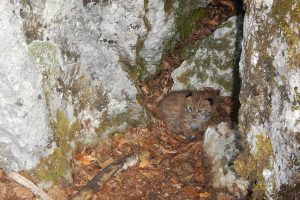 A first cub photo in over a decade of Europe’s largest and rarest cat, a wild Balkan lynx, raises hopes for the surival of this critically endangered animal.

With less than 50 cats remaining in the wild in the mountains of the Western Balkans, this subspecies of the eurasian lynx is close to extinction.

Just two years ago a cub was stoned by a local shepherd on Munella mountain in Albania — the only recent evidence of this subspecies rearing young.

The biggest challenge is the population’s small size and low survival of cubs, says Mareike Brix from EuroNatur, who have been working on the protection of Balkan lynx for a decade with their partners. “Only 25 per cent of all kittens born reach adulthood,“ says Brix.

But now, a picture of a new live cub has been captured in a second location, the Mavrovo National Park in neighbouring Macedonia, suggesting there is a healthy reproducing population there.