Chinese Mountain Cat (Felis bieti) must be one of the most poorly known cats in the world.  With a very small known range on the northeastern Tibetan Plateau (Qinghai and northwest Sichuan), it is the only cat endemic to China and it was as recently as 2007 that it was first photographed in the wild (via a camera trap).

Chinese Mountain Cat is so poorly known that a young Chinese scientist who wanted to study it for his PhD was told by his supervisor that there simply wasn’t enough information to warrant a PhD and to focus on another mammal.  In recent years there have been sporadic sightings in Rouergai (Sichuan Province) and near Yushu (Qinghai Province) but it remains one of the most mysterious felids on the planet.

No wonder the numbers are declining rapidly. Panthera claims to be the world’s premier cat conservation agency, but they promote leopard and lion hunting. They are hunting themselves (lions, leopards, game) in South Africa in their “spare time”. This is a Disgrace!

Read the full report in the Daily Mail. 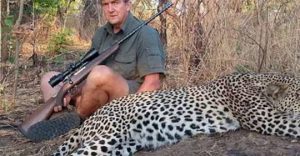 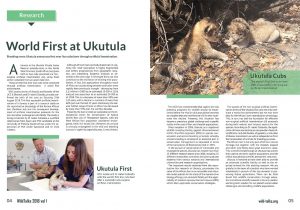 Yes these pictures (just a few of too many) are shocking and disgusting, but we need to shown this to raise awareness: this is how our fellow “humans” treat animals, like on these pictures the Asian Leopard Cat.
Jane Baker is the Jane Goodall for the Leopard Cat, giving her all – fighting for this species, and we thank her for her great work and dedication to this wonderful species that doesn’t deserve the ugly human treatment.

Fur is from beautiful animals used and abused by ugly people, often skinned alive. Not just for fur, but also to end up being eaten.

500,000 Leopard Cats are slaughtered a year for the illegal fur trade.One furrier in China has stock piled over a million Leopard Cat skins,Japan buys 65 per cent of these furs and makes coats,and blankets from their fur.

Time to raise awareness and put a stop to this cruel and unnecessary business. Save the Leopard Cat! 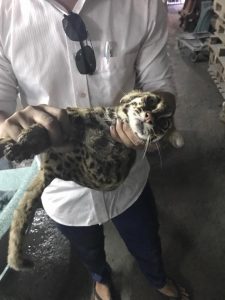 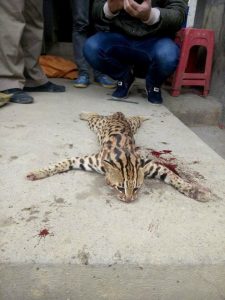 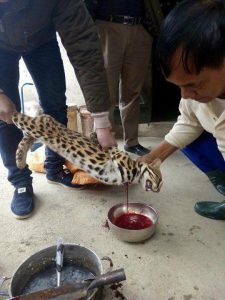 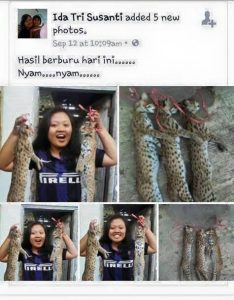 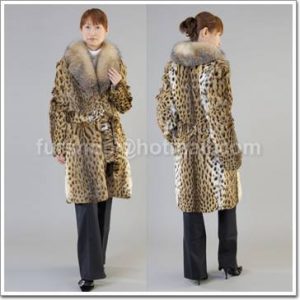 Two orphaned Scottish wildcat kittens have been rescued by conservation group Wildcat Haven, and moved to a purpose-built rehabilitation and release centre in the West Highlands where they will be released back into the wild at the first opportunity. With only 35 pure Scottish wildcats remaining in the world, these 2 kittens represent 6% of all the Scottish wildcats in existence and will provide a priceless boost to saving this species in the wild. These are the rarest kittens on earth.

Wildcat sightings are reported to Wildcat Haven on a regular basis, and most often turn out to be sightings of domestic tabbies or part-wildcat ‘hybrids’. However this is the first time they have been recently born wildcat kittens, seemingly orphaned and not far from a road.
“I almost fell off my chair when I saw the photos.” Explains Wildcat Haven’s chief scientific advisor Dr Paul O’Donoghue, “The markings looked amazing, far better than any kitten I’d seen in a zoo, but in a very exposed place. It seemed likely they had been abandoned or orphaned and were in grave danger.”

By next morning Wildcat Haven team members were converging on the East Highlands from across the UK, with permission granted by Scottish Natural Heritage to carry out a rescue if the kittens were indeed orphaned.

24 hours after the original eye witness sighting there was still no sign of a mother and the kittens were moving closer to the road. As the first fieldworkers, Charlie Chandler and Savannah Brownlow, arrived on site weighing up how to best make a capture, they were met by the same eye witness, carrying two weak and dehydrated wildcat kittens wrapped in his jacket.

Wildlife filmmaker Steve Piper, who has worked with wildcats for 15 years, arrived shortly afterwards, “Charlie and Savannah had the two weak and timid kittens safe with some bedding and food. We went straight out to set remote cameras and bait to make absolutely sure there wasn’t a mother around looking for them.

“By next morning after some food and water the timid kittens had transformed entirely and we had two spitting balls of fury in their place. They were little mini wildcats stamping, hissing and growling, displaying all the explosive aggression typical of the species, reputed to be untameable”.

Piper spent several more days searching the area for the mother but to no avail; “Nothing on the cameras, no tracks, no eyeshine or calling in the night. Perhaps she was run over, perhaps snared, sadly there are a lot of threats out there for wildcats; these two orphans were incredibly lucky to be found in time.”

Meanwhile, the kittens had received a clean bill of health from the vet and gone on to meet O’Donoghue at a specially designed wildcat rescue facility in the West Highlands established by conservation group, Highland Titles, a long term supporter of Wildcat Haven’s work.

“We set it up last year.” Explains Highland Titles Founder and conservationist, Dr Peter Bevis, “I’d heard about injured wildcats getting handed in to vets and ending up in a zoo which just seemed wrong to me. I thought we could fence off some of our forest and that would be a good place for an injured wildcat to recover before being released back into the wild. I never expected that we’d have two orphaned wildcat kittens coming to stay though!”

The kittens were moved in, with Wildcat Haven’s vet Nick Morphet sleeping close by on site to watch over them and ensure they settled in safely. There was little need to worry though, true to their heritage as one of nature’s most stubborn survivors, the kittens were out of their den and exploring within half an hour.

“I am overjoyed that we’ve been able to give these two orphaned wildcat kittens a lifeline.” comments O’Donoghue, “They’re safe in the largest wildcat enclosure in Europe, Highland Titles have literally put a fence round a forest, there’s even a stream. It’s a near-wild environment for these priceless kittens to grow into adults with our whole team looking out for them as they do so.

“I hope everyone across the Highlands remembers we have this facility available; orphaned kittens or injured adults, we can provide them a safe place to recover, and ensure their return to the wild. We must do everything we can to keep as many wildcats in the wild as possible. The look in these kitten’s eyes tells you immediately that they don’t belong in a cage.”

“Once these kittens are old enough they will be released at the first opportunity. Any wildcat that comes here will be returned to the wild. The purest wildcats are in the wild, they can be protected there, and it’s where they belong, not in a cage selling zoo tickets. These kittens will be a huge boost for the species in the wild”

CRITICAL NOTE: If you ever come across Scottish wildcat kittens don’t assume they have been abandoned! Their mother may have just left them to go hunting. Try to get some photos and send them to admin@wildcathaven.co.uk with the location and your contact number.

The non-hybridised Scottish wildcat population is estimated to number as few as 35 individuals. The captive population is heavily hybridised and neutered, and of little value to conserving the species in the wild.

Conservation group working across the Scottish Highlands conserving Scottish wildcats in the wild. Working closely with local communities and landowners Wildcat Haven uses widespread neutering of domestic cats to remove the threat of hybridisation in remote areas still populated by wildcats. They also campaign for protection of key habitat such as Clashindarroch Forest; where they are supporting a petition with over 220,000 signatures (www.change.org/SaveTheWildcats). 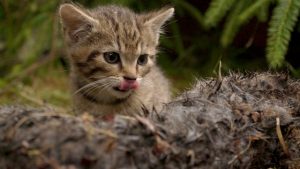