A few hours outside of Bangkok tourists can visit the famous “Tiger Temple”. This monastery and wildlife sanctuary, formally called ‘Wat Pa Luangta Bua Yanasampanno’ holds no less than 147 tigers and other animals. This will soon be a thing of the past. 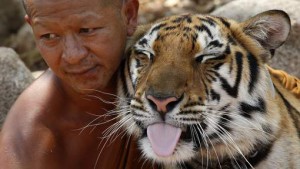 Nipon Chotiban, head of the Department of National Park, Wildlife and Plant Conservation, said the temple had been keeping the animals without a legitimate permit. The wildlife sanctuary raided the temple in February to investigate the circumstances. Chotiban sent an official notice to the temple soon after, ordering them to return the tigers to conservation areas or to local zoos. All of the tigers are due to be relocated on April 24, after which they will receive a health check.

Besides this, there will be an inspection of microchips, in order to see whether three reported tigers are missing.

The news comes as a big relief to conservationists in Thailand, who have been trying to free these tigers for years. They’ve accused the monks at the temple of breeding programs, trafficking of endangered species, and illegally selling the animals. The tigers have been chained up and trained to pose for photos with tourists since the temple first started housing them in 1999.

Earlier this month six bears were seized from the temple and in February birds of paradise were found (listed as endangered species).