Why the need for a ” World lions day”? Like most species, the lion is endangered and facing extinction.

On the map below, the habitat of African lions in 1920 is marked in red. In blue today’s habitat of lions is indicated. In just half a century humans succeeded in bringing lions to the brink of extinction. In Africa the numbers have been reduced from 200.000 to a mere 20.000 today. Of the remaining population, only 4000 are males… In the knowledge that only 10% of the males are dominant and thus reproducing for the next generation, you can see that the gene pool is extremely small and eventually will weaken the species.

We have to keep raising awareness for the numbers declining rapidly.
On World Lion’s Day (10/08/20) more than any other day, we have to share the message that The King is not going to survive, if we don’t act rapidly.

About 70% of Kenya’s Wildlife is found outside of the protected areas. One of the fundamental and most effective approaches to conserve wildlife is to preserve the ecosystem.

Gamewatchers Safaris and Porini Camps work closely with communities living alongside National parks and wildlife reserves to help them derive benefits from conserving wildlife species and the indigenous habitat. The communities are able to earn an income from ecotourism by setting aside areas of their land as wildlife conservancies, thereby creating wildlife dispersal areas outside the parks, increasing wildlife numbers, habitat and biodiversity.

The Porini Conservancy concept pioneered by Gamewatchers Safaris in partnership with the local communities in Selenkay in Amboseli and Ol Kinyei in the Masai Mara has made a significant contribution to wildlife conservation and habitat protection in these areas. Within just a short time of conception each conservancy saw a significant increase in wildlife numbers and a regeneration of vegetation in areas that were previously over-grazed by livestock. At Selenkay, elephants returned after an absence of twenty years and in the Ol Kinyei conservancy the number of lions increased very quickly with several residential prides. Besides, we’ve observed higher cheetah numbers, cub survival rate and an influx of other species. The Ol Kinyei conservancy is currently recognized as International Union for Conservation of Nature (IUCN) Green List site.

The concept ensures minimal impact on the habitat and wildlife by minimizing the numbers of vehicles and camps in the conservancy. This has reduced stress caused by overcrowding by tourist vehicles and intense human impact on the habitat. The conservancies provide a buffer between community and protected areas, it also hosts vulnerable species such as lion, cheetah, leopard, elephant and Maasai giraffe and.

Studies by the Mara Predator Conservation Program indicate higher survival rate of wildlife in conservancies with low tourism density. Gamewatchers Safaris and Porini Camps pay monthly land leases directly to local community from tourism earnings thereby reducing dependence of livestock for livelihood and providing an alternative source of income. This unique concept has secured land for conservation and minimized land subdivision from other competing non-wildlife land use such as agriculture and infrastructure development.

With the closing down of safari tourism for the immediate future because of the global Coronavirus Pandemic there is growing concern about the welfare of those Maasai communities who depend on tourism income from conservancies. There are also fears that the future of these important areas of protected wildlife habitat may be threatened with serious consequences for the teeming wildlife species that have made them their home.

Currently, in Ol Kinyei, the Porini Mara Camp Manager Jimmy Lemara, the conservancy manager and some of the rangers are patrolling the Ol Kinyei Conservancy to ensure wildlife safety. During the Easter holidays “Green Eye” one of the 3 dominant lion males of the famous Rekero pride, was sighted with a wire snare around his neck. The Ol Kinyei Conservancy in collaboration with Kenya Wildlife Service Veterinary, Niels Mogensen Senior Researcher with the Mara Predator Conservation Program helped locate Green Eye, managed to dart him, and remove the snare.

To enable payment of the monthly leases and ranger salaries to secure these important habitat and safeguard wildlife in the conservancies, Gamewatchers Safaris and Porini Camps have introduced the “Adopt-an-Acre” plan. Through the Adopt-an-Acre plan, contributors can adopt an acre of land in the conservancies for a year via a donation to the Wildlife Habitat Trust which will help pay for the leases and rangers wages until the camps re-open, ensuring that the Maasai families continue receiving some income and the conservancies can continue to exist. The Trust will be audited by a reputable firm of auditors in Nairobi, Grant Thornton Kenya, so that contributors can be confident that all the money will be used for the intended purpose.

You can make a difference by supporting the Adopt-an-Acre program, please visit https://www.porini.com/adopt-an-acre-2/ for more information. 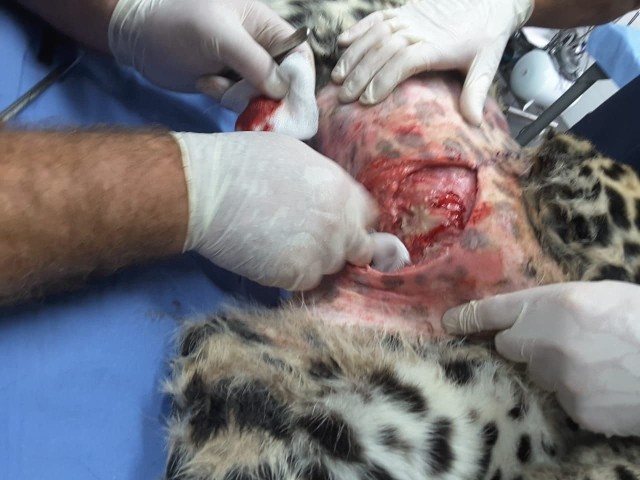 The #1 project Wild Cats World currently supports is a leopard rescue of a badly injured wild male leopard. This fundraiser is to give him the essential medical care.

The injuries result from snares on a farm that have done a lot of damage. He is badly injured but is in good hands now. This project is in association with a Leopard Rescue, Rehab & Release program in the Mpumalanga district, South Africa.

Please, support us! Funds are badly needed. So far, all funding was provided for by the vet and the Rehab program. But if we want to continue this badly needed work, we need every penny we can get. See the link below.

It is also possible to donate by Paypal,
Email: info@wildcatsmagazine.nl

Video of the 2nd operation.

The African leopardcubs @ Wild Cats World meeting their daddy for first time without a fence between them.